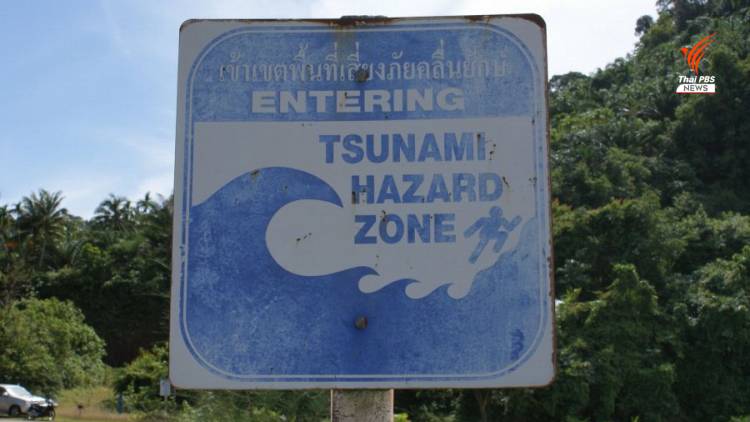 Public disaster experts admitted today (Sunday) that the Thai public is generally unaware of the danger posed by a repeat of a devastating tsunami, like that which struck many countries in Southeast Asia and around the Indian ocean, including the west coast of southern Thailand 17 years ago, and that there is a lack of a credible tsunami early warning system.

Expressing his views on the anniversary of the Asian tsunami today, Dr. Pennueng Wanichchai, chief of the project to mitigate the dangers of earthquakes for the Ministry of Science, Research and Innovations, said that there is a possibility of another tsunami in the life time of this generation, because a huge source of energy has accumulated under the Andaman Sea and is yet to be released in the form of an earthquake and tsunami.

In a worst case scenario, if there is another tsunami, he said that he is not sure that people will be evacuated to safety in time, if there is no evacuation plan in place, capable of being implemented at short notice.

Without an evacuation plan and being unprepared, Dr. Pennueng said that people may not know what to do first, with many likely to head home to warn their loved ones, while others may rush to schools to pick up their children first.

Evacuation is a complicated process and, without proper preparations, he said he is afraid that many people will die because they will not evacuate in time.

Dr. Pennueng also noted that some areas struck by the tsunami 17 years ago are now heavily populated and with many hotels and many road signs for evacuation routes, which were built after the tsunami.

Assistant Professor Dr. Panon Latcharote, a researcher at Mahidol University, said that one of the reasons for the high death toll in the last tsunami was the lack of preparation for coping with a disaster of such a magnitude, adding that evacuation is a process which requires periodic practice, in order to get used to it, and it must be able to be put into actual practice once there is a disaster.

He said that the research team is working on a tsunami risk map for areas on the Andaman sea coast, to instil awareness of the dangers posed.

Assistant Professor Dr. Pasakorn Panon, a researcher at Kasetsart University, stressed the need for a study of the powerful fault lines in neighbouring countries, which may affect Thailand.

He noted the main constraint in creating a tsunami simulation model for Thailand is the lack of high definition geographic data on the coasts of Thailand, both in the sea and on land.

The Asian tsunami killed an estimated 282,000 people in 14 countries, including more than 5,000 along southern Thailand’s west coast.

How a proposed tax on share trading will affect investors