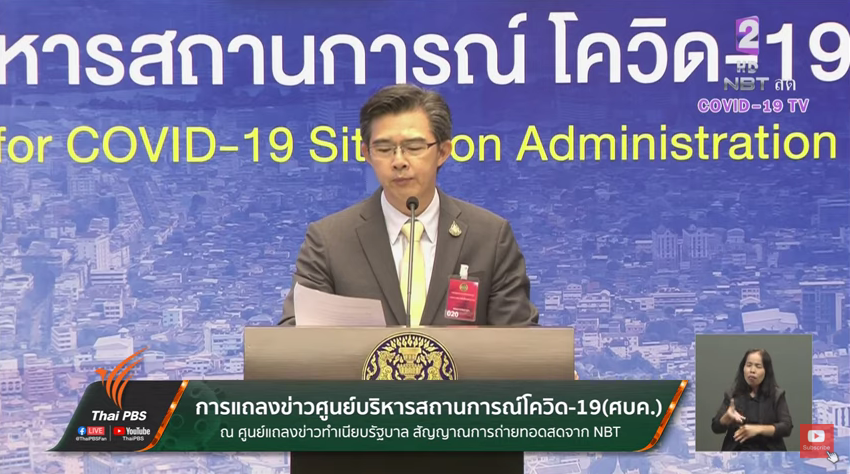 Thailand today recorded six new COVID-19 cases today, all in state quarantine, as the CCSA repeated its appeal to the Thai public to keep their guard up, citing Vietnam and China, both of which are facing second outbreaks of the disease.

Of the six new infections, five are Thais, including four students, who have returned from Egypt, and the sixth is a 52-year old Thai chief working on a cruise ship in the Netherlands.
The four students, all asymptomatic, tested positive for COVID-19 on July 29th, while they were in state quarantine in Chon Buri province. The fifth tested positive for the infection on July 30th.

Dr. Taweesin told a news briefing today (Friday) that the global COVID-19 situation remains a matter of serious concern as, worldwide, new infections are increasing unabated, with more than 200,000 cases being recorded on daily basis for several consecutive days. He warned that, if daily infections exceed 250,000, there could be a million new cases every four days.

Citing the case of Vietnam, he said that the situation appeared to be under control, but yesterday alone 50 new cases were reported, prompting Vietnamese health officials to tighten preventative measures.

Japan, the Philippines and Australia are facing second waves of infections, he said, adding that the infection rate in China is rising again, with 127 new cases, including 98 locally acquired infections.

In the United States, Dr. Taweesin said Dr. Anthony Fauci, director of the National Institute of Allergy and Infectious Diseases, has asked residents of Ohio, Tennessee and Indiana to help in preventing an uncontrolled surge of infections.