Chulalongkorn University’s administration has been urged to do something about the Student Union’s controversial decision to cancel a customary procession, featuring the Phra Kieo coronet, during this year’s traditional soccer match against Thammasat University.

Nantiwat Samart, former deputy director of the National Intelligence Agency, said in his Facebook post that the union’s choice of the date of October 23rd to announce the decision was to coincide with King Chulalongkorn Day when many Thai people across the country were paying homage to the late King.

He also suggested that the use of some wording in the announcement was intentionally disrespectful to the coronet, an emblem of Chulalongkorn University which was founded by King Chulalongkorn or King Rama V.

Nantiwat said that the university administration must protect the name of the late king, the founder of the university, against the disrespectful act of “just a handful” of students.

Meanwhile, former commerce minister and ex-Pheu Thai MP Watana Muangsook tweeted that the traditional football match is an annual event for Chulalongkorn and Thammasat universities’ alumni associations, while the Chulalongkorn University Student Union is just a member of its organizing committee.

“The Phra Kieo coronet does not belong to the student union and the union does not have the right to prohibit anyone from using the coronet,” said Watana, adding that the Chulalongkorn alumni will volunteer to carry the palanquin if no current students are willing to do so.

By tradition, the coronet is put on the palanquin, on which are seated a male and a female student and carried aloft by about 50 students. 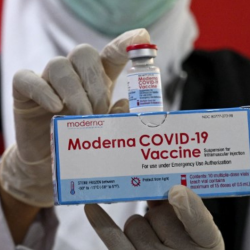 Full dose or half dose? Clearing up confusion over Moderna boosters