A member of the Thai military, on a UN peace mission in South Sudan, has died from an unknown cause in his room at a Thai army camp.

His body has been sent to a hospital for an autopsy before being flown back to Thailand for funeral rites.

The RTA expressed condolences to the victim’s family and promised to take care of the air transport, to repatriate the remains, the funeral costs and welfare for his family. 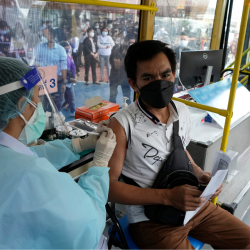 PM says no cabinet reshuffle yet