The Thai Senate approved yesterday (Monday) a bill to deal with repeat sex offenders, legalising the use of anti-libidinal drugs to suppress or reduce sex drive. The bill passed by 137-3 votes with four abstentions, according to Deputy Senate Speaker Supachai Somcharoen.

After the approval by the Senate, the bill will now go to the cabinet for consideration.

Under the bill, medication can be prescribed only with the approval of a psychiatric specialist and an internal medicine specialist, and with the consent of the sex offender in question. This measure can also be applied to offenders after they have served their sentences, or those who are in rehabilitation, to prevent repetition of the offence.

Such treatment can also be used to reduce the prison term or to suspend the remaining term imposed on convicted sex offenders.

In his recent Facebook post, Dr. Kampanart Pornyoskrai, a urology surgeon, said that anti-libidinal treatment of repeat sex offenders has been a controversial issue and the subject of widespread debate adding, however, that some countries have already adopted the use of such drugs.

He said that there are two ways to suppress the male sex drive, by castration or by means of injecting androgen antagonists or testosterone blockers.

The first method is easy, convenient and economical, he explained, adding that the second method is quite costly because the offender must be given the medication every three months for the rest of their life.

The Pavena Foundation for Children and Women said it received 10,147 complaints of alleged sexual assaults against minors in 2020. Most cases involved rape and indecent assaults. 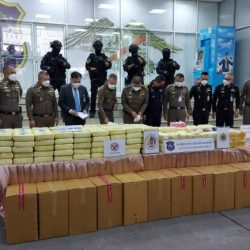 Thai police crackdown on a major drug gang, seize assets worth about ฿100m