Many hotels within walking distance of the Rajamangala National Stadium are booked out by fans of Manchester United and Liverpool FC, keen to watch the pre-season friendly match this evening (Tuesday).

Atithep Vasinamekhin, general manager of the Witz Hotel in the Ramkhamhaeng area, which is about 2km from the stadium, told Thai PBS that, when he heard about the Bangkok match, he launched a promotional campaign, offering room rates at 1,499 baht per night.

He said that the response was overwhelming and all 130 rooms are fully booked for July 12th, adding that about his clients include Chinese, Malaysians, Indians and Cambodians, with some checking-in as early as July 7th.

Most Thai customers from the provinces booked to stay just tonight.

Atithep said that this is the first time, since the COVID-19 outbreak more than two years ago, that his hotel has been fully occupied, even though it is for just a short period, adding that he believes several other hotels in the Ramkhamhaeng area are fully booked as well.

One of the Thai customers, Aruma Saengwong, a dedicated Liverpool fan, said she and her husband booked a hotel room two weeks in advance, for fear that there would be no rooms available.

She said they both travelled from the north-eastern province of Sakhon Nakhon yesterday to watch this match which, she added, is a rare opportunity.

An 11-year-old Malaysian boy, who came with his parents, said that he does not intend to watch the match, which he hopes Manchester United will win, but wants to buy souvenirs, such as a Manchester United T-shirt.

Rain coats also sold like hot cakes after the Meteorological Department forecast heavy rain for most of this week. One trader claimed that he sold almost 300 coats in just half an hour.

Many others queued up in single file to buy tickets for the match, which were being offered for sale at a 50% discount. Only 300 tickets, with face values of between 7,000 and 15,000 baht each, were offered at half price, but only four tickets were allowed per buyer.

One fan said that, when he learned about the discount tickets, he came to the stadium at 1pm yesterday to queue up, hoping to get four tickets for his whole family to watch the game of their lives.

The sale of discounted tickets, however, provoked heavy criticism on social media, especially on Twitter. 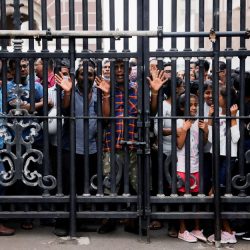