Rescue teams of Laos, Thailand and China have been rushing to rescue survivors and search for signs of the missing since Monday night in the flooded villages of Sanamxay district in Attapeu province of Loas which were hardest-hit by devastating floods unleashed by the collapse of a hydropower dam.

It quoted local officials as reporting that at noon on Wednesday, over 80 rescue personnel from Water and Dive Rescue Thailand Club and Hook 31 (Nakhon Ratchasima) of Thailand with rescue boats and essential assistance items passed through the Vangtao-Chongmek border checkpoint in Champassak province. They are contributing to efforts to search for the missing.

Meanwhile, over 30 rescue personnel from China have already registered with local officials to assist flood victims and search for the missing.
More Chinese rescue personnel and medical experts also arrived in Vientiane and are travelling to the district, an official in charge in Sanamxay district told Vientiane Times yesterday.

A total of 17 rescue personnel are continuing to search for the missing at the scene and 35 rescue personnel providing assistance and providing first aid for victims at a temporary shelter in Pakxong district, Champassak province, senior officer with Vientiane Rescue 1623 under the Foundation for Assisting Poor People of the Lao, Mr Thaksine Khounasen said.

Japan has provided essential equipment to assist the victims. Meanwhile, a medical team from South Korea was also on its way to Laos, the paper said. 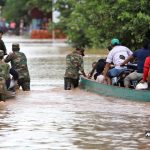