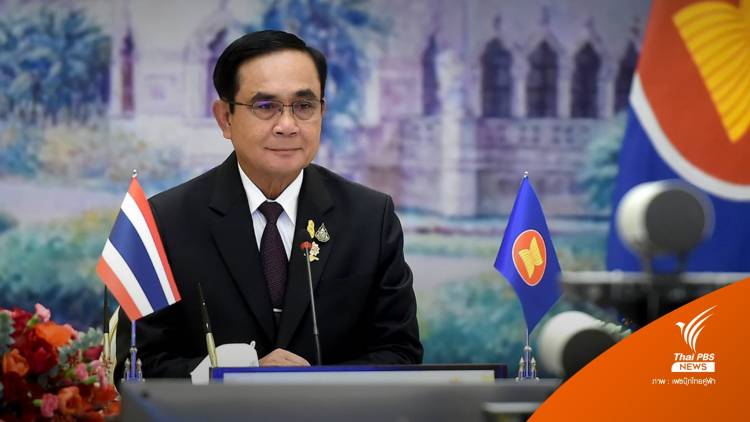 In his speech, on the first day of the 39th ASEAN Summit via a video conference this morning (Tuesday), Thai Prime Minister Prayut Chan-o-cha urged other leaders of the Association of Southeast Asian Nations (ASEAN) to use a clear and coordinated voice on regional issues as well as innovative approaches to the United States and China, according to Thai Government Spokesperson Thanakorn Wangboonkongchana.

Mr. Prayut also urged his fellow leaders to maintain peace in the region, as well as constructive cooperation with external partners, to allow for the continued development of the bloc’s economies and societies.

According to the Thai Prime Minister, international cooperation is essential to overcome recent challenges effectively, be it the COVID-19 pandemic, technological advancement, climate change or others.

First, ASEAN should enhance its engagement with external partners and maintain solidarity and a leading role in advancing various initiatives, to augment ASEAN’s opportunities and strength in conducting external relations. ASEAN should maximise incoming opportunities, to advance agenda that are of interest and continue to promote ASEAN’s centrality in the region.

Second, ASEAN must collectively use a clear and coordinated voice on ASEAN’s centrality in the regional architecture and strengthen ASEAN-led mechanisms, by employing the ASEAN Outlook on the Indo-Pacific (AOIP) as a tool to encourage the major powers to engage constructively in our region, to ensure regional peace and stability.

Third, ASEAN should be able to contribute to promoting strategic trust between China and the US, by considering innovative approaches when engaging with them and allowing the superpowers to find commonalities on issues of mutual interest in the region, such as climate change and human capital development, among others.

On the situation in Myanmar, the Prime Minister emphasised that it is a test of ASEAN’s ability to resolve problems in our own region. ASEAN’s constructive role in addressing this situation is of paramount importance and our action on this matter shall have a bearing on ASEAN’s credibility in the eyes of the international community.

Wishing to see peace and stability in Myanmar, and supporting the implementation of the 5-Point Consensus, Mr. Prayut pointed out that a special envoy of the ASEAN Chair should be able to visit Myanmar soon, which would be an important first step in the process of confidence-building, with the goal of encouraging dialogue among the various parties in Myanmar. He also urged ASEAN to provide humanitarian assistance to all sides.

Myanmar topped the agenda of Tuesday’s talks between regional leaders, with the country still in chaos following February’s military takeover and the subsequent deadly crackdown on dissent.

Delta Plus COVID variant may be 15% more transmissible than Delta strain, experts say

Thailand’s first COVID Delta Plus case not same as UK, 18 others found with Alpha Plus