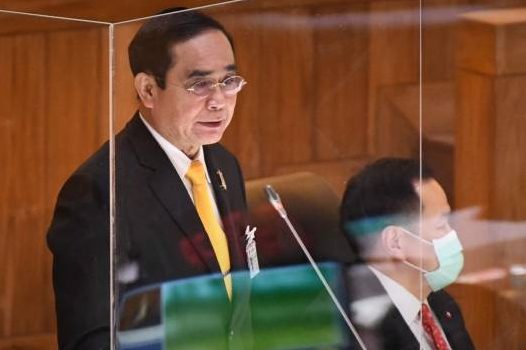 Prime Minister Prayut Chan-o-cha told MPs on both sides of the house today (Friday) that, if they want a general election, they must cooperate with one another by attending parliamentary meetings, especially to ensure the passage of the two pending election-related organic bills.

He said he does not understand what kind of political game some parties were playing in parliament, when they show up in the chamber but refuse to declare their presence officially.

Personally, he said, he wants the two organic bills to be passed quickly, but admitted that he is powerless to order the MPs to attend meetings, which is a matter for individual MPs and cooperation among MPs from both camps.

He went on to say that nothing can move forward if House meetings keep collapsing due to the lack of quorum.

He said that chaos may ensue if the country is unable to move forward and warned that Thailand has gone through such an experience before and it should have learned its lesson.

The House meeting collapsed again today, the second time in a week, due to the lack of quorum, while debating the report of the House panel on coastal erosion and ways to solve the problem.

When it came time to vote, the number of MPs in the meeting appeared to lack a quorum. House Speaker Chuan Leekpai ordered a 15-minute break to allow time for MPs to enter the chamber. A head count was ordered, by means of inserting ID cards, but only 195 MPs were present, short of the minimum 237 to make up the quorum. The meeting was then adjourned.

The prime minister also said that he does not care whether MPs like him or hate him, but hopes that they love the country and should unite.

While stressing that he is not addicted to power, Prayut declined to answer to a reporter’s question about whether or when he will become the leader of the ruling Palang Pracharat party.