Prime Minister Prayut Chan-o-cha took a swipe at exiled former prime minister Thaksin Shinawatra, without naming names, in his response to attacks on him by Opposition and Pheu Thai party leader Chonlanan Srikaew at the start of the censure debate today (Tuesday).

Chonlanan accused the prime minister of lacking in leadership, incompetence, abuse of power, lacking vision and of lacking moral legitimacy, among other things. “If Prayut were the brand name of a product, that brand name would be rejected by the people if they listen to the Opposition’s debate,” he said.

He also accused the government of a complete failure to manage national affairs, from the economy, environment and public health to public borrowing, income disparity, illegal narcotics and divisions among the people.

In response to the allegation that he was the root cause of political polarisation in Thailand, the prime minister refuted the claim and told the Pheu Thai party to look back at its history, its mistakes and the “individuals who escaped imprisonment.”

He also said that he does not mind that Chonlanan might have admired someone with whom he used to work, with someone who he thought is smarter than him, and asked Chonlanan to try his best to bring them back to Thailand.

The prime minister went on to say that he has heard Chonlanan’s allegations against him and his government in the previous censure debates and said it is an “old script” adding, however, that he is willing to respond all of them.

Nevertheless, he asked the opposition leader not to compare the government to the vulnerable group, which includes people over 60, those with underlying diseases and the pregnant, noting that this comparison damages the dignity of those people.

He claimed that the government has a vision for Thailand’s future in its 20-year national strategy, which aims to reform the country in all aspects, including economic restructuring through innovation.

On the COVID-19 pandemic, the prime minister claimed that the government had succeeded in containing the spread of the disease, to the extent that its model of success has been applied in other countries. 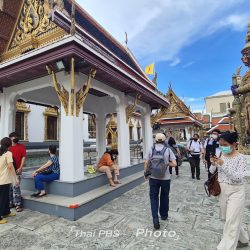 Many Thais start to remove face masks in some places, online survey finds