Nearly 92,000 hectares of land in provinces in Thailand’s main river basins are currently submerged, including almost 15,000 hectares of farm land. According to the Geo-Informatics and Space Technology Development Agency, the worst-flooded areas are in Nakhon Sawan, Phichit, Sukhothai, Phitsanulok and Ayutthaya provinces.

The latest tourist attraction in Kanchanaburi, the Sky Walk, which is a transparent walkway over the famous River Kwai, was closed yesterday, only one day after it was opened to the public, due to a shortage of special shoes, which all visitors are required to purchase and wear. The Kanchanaburi Municipality apologised yesterday for the temporary closure, saying that the public will be notified when the Sky Walk is open again.

Experts have warned that the worst rain for Bangkok this year is yet to come, although the capital and its suburbs have been lashed by heavy rain, measured at over 120 millimetres in 24 hours on six days between August 1st and September 10th. According to an environmental expert from the National Institute of Development Administration, people in Bangkok will face extreme weather events more often in the near future as global warming gets worse.

Pro-democracy Ratsadon protest leader Parit Chiwarak, and three other protesters were given two-month prison terms today, suspended for one year, over their protest in front of Bang Khen police station on August 7th, 2020. The court also imposed a fine of 11,300 baht on each of the four protesters after finding them guilty of illegal assembly in a public venue, violation of the Communicable Diseases Act, illegal use of loudspeakers and violation of traffic laws. 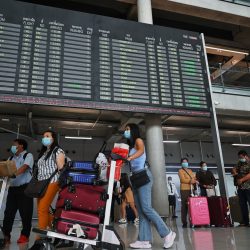 Most of Thailand’s foreign arrivals in July were Malaysian tourists