The governor of Thailand’s western province of Kanchanaburi has ordered the closure of the border with Myanmar, effective Monday until further notice, as a precaution against a possible influx of people escaping the worsening COVID-19 situation in Myanmar.

The collapse of the neighbouring country’s health system, triggered by mass arrests of medics opposing the military regime and an acute shortage of vaccines, have resulted in widespread infections and deaths.

The areas of the 371km long border to be sealed off cover the entire Sangkhla Buri, Thong Pha Phum and Saiyoke districts, Ban Kao sub-district of the Muang district and Jarakhae Phuek sub-district of Makham Tia district of Kanchanaburi province.

Governor Jirakiart Phumisawat said the provincial communicable disease committee, of which he is the chair, decided that the border closure is necessary because the COVID-19 pandemic is very serious, with many people trying to flee the disease and seek refuge in Thailand’s Kanchanaburi province via some 43 natural border crossings.

Road checkpoints, manned by police, troops and local officials, have been set up on routes connecting with the border. Transport of consumer products, medical supplies and domestic post in and out of the five districts are allowed, but public transport is only available in designated locations.

The governor also imposed 10pm to 4am curfew in the five districts, effective from August 6th until further notice. Permission will be required from the district chief officers if anyone wants to leave home during the curfew hours. 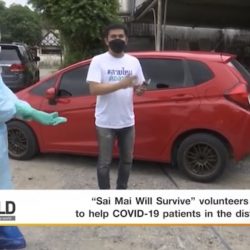