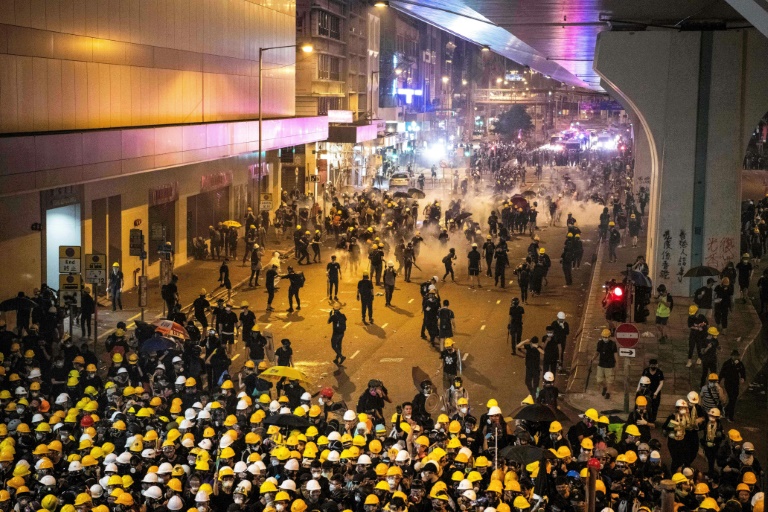 Hong Kong descended into chaos Sunday night as riot police fired tear gas and rubber bullets at anti-government protesters hours after China’s office in the city was daubed with eggs and graffiti in a vivid rebuke to Beijing’s rule.

Acrid clouds of tear gas wafted through the city’s densely packed commercial district as police battled masked protesters after another huge protest march, with seemingly no end in sight to the turmoil engulfing the finance hub.

A group of masked, stick-wielding government supporters also descended on a group of protesters in a train station, beating multiple people including reporters who live-streamed the assaults.

Hong Kong has been plunged into its worst crisis in recent history by weeks of marches and sporadic violent confrontations between police and pockets of hardcore protesters.

The initial protests were lit by a now-suspended bill that would have allowed extraditions to mainland China.

But they have since evolved into a wider movement calling for democratic reforms, universal suffrage and a halt to sliding freedoms in the semi-autonomous territory.

Tear gas and rubber bullets have become frequent while the city’s parliament was trashed by protesters earlier this month — as Beijing’s authority faces its most serious challenge since Hong Kong was handed back to China in 1997.

On Sunday tens of thousands of anti-government protesters marched through the streets, the seventh weekend in-a-row that residents have come out en-masse.

But the march followed a now familiar pattern: a huge peaceful turnout followed by a night of running clashes with more hardcore groups.

The attacks by masked men on protesters was a new escalation and will ratchet up fears that the city’s feared triad gangs are wading into the political conflict.

Sunday evening’s coordinated assault took place in Yuen Long, a district in the city’s New Territories near the Chinese border where the criminal gangs remain influential.

Footage showed the men attacking protesters on the platform and inside trains.

Earlier in the evening protesters had descended on the Liason Office — the department that represents China’s central government — which was pelted with eggs and daubed with graffiti.

“We are here to declare that Beijing is the one violating our governing values and judicial procedures,” a 19-year-old protester who gave his first name as Tony, told AFP.

“You taught us peaceful marches are useless,” was one of the slogans sprayed on the Liason Office walls.

Hong Kong’s government condemned both the protesters and the men who attacked people in their name.

“This is absolutely unacceptable to Hong Kong as a society that observes the rule of law,” the government said in a statement.

Six weeks of huge protests have done little to persuade the city’s unelected leaders — or Beijing — to change tack on the hub’s future.

Under the 1997 handover deal with Britain, China promised to allow Hong Kong to keep key liberties such as its independent judiciary and freedom of speech.

But many say those provisions are already being curtailed, citing the disappearance into mainland custody of dissident booksellers, the disqualification of prominent politicians and the jailing of pro-democracy protest leaders.

Authorities have also resisted calls for the city’s leader to be directly elected by the people.

Protesters have vowed to keep their movement going until their core demands are met, such as the resignation of city leader Carrie Lam, an independent inquiry into police tactics, amnesty and a permanent withdrawal of the bill.

They have also begun calling once more for universal suffrage.

There is little sign that either Lam or Beijing is willing to budge.

Beyond agreeing to suspend the extradition bill there have been few other concessions and fears are rising that Beijing’s patience is running out.

In the afternoon a huge crowd marched through the streets calling on the city’s pro-Beijing leader Carrie Lam to heed their demands. Organisers said some 430,000 people turned out.

“Carrie Lam really needs to respond and I hope we will see that soon.”

On Saturday, the establishment mustered its own supporters in their tens of thousands for a rally, a gathering that was covered in detail by Chinese state media and pro-Beijing newspapers in Hong Kong.

Few see a political solution to the crisis on the horizon.

Steve Vickers, a former head of the police’s Criminal Investigation Bureau before the handover who now runs a risk consultancy, said the public order situation would likely “worsen” in the coming weeks. 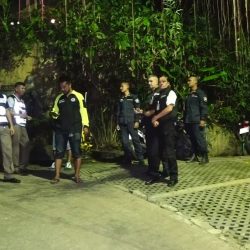 Spanish tourist gets lost in Samui’s forest on Sunday