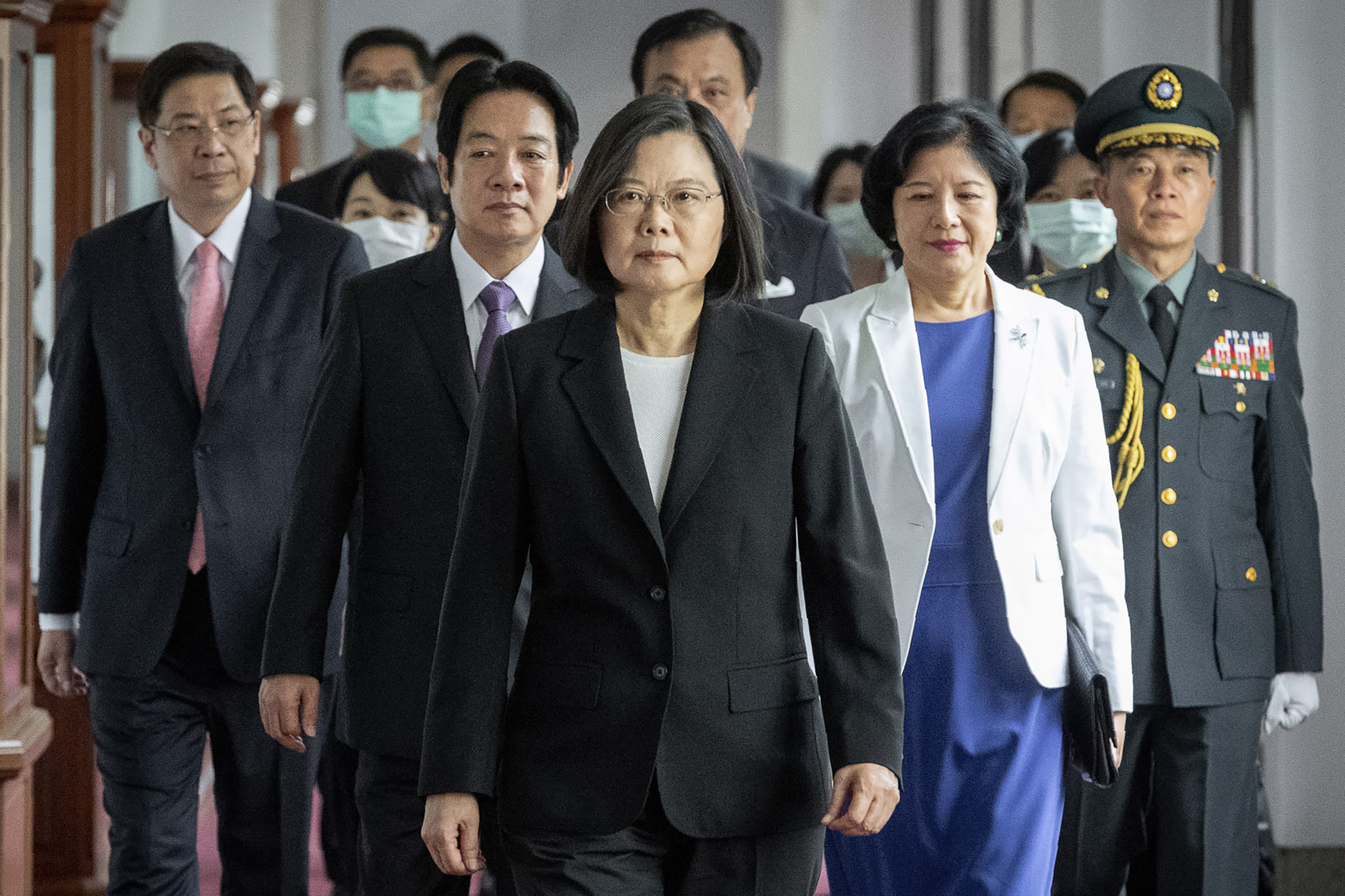 In this photo released by the Taiwan Presidential Office, Taiwanese President Tsai Ing-wen, center, walks ahead of Vice-President Lai Ching-te, left of her, as they attend an inauguration ceremony in Taipei, Taiwan, Wednesday, May 20, 2020. Tsai was inaugurated for a second term amid increasing pressure from China on the self-governing island democracy it claims as its own territory. (Taiwan Presidential Office via AP)

Taiwanese President Tsai Ing-wen called for stability in relations with China in her inaugural address Wednesday but said she would not accept Beijing’s political terms that would “downgrade Taiwan and undermine the cross-strait status quo.”

Reelected by a landslide late last year, Tsai said relations with Beijing had reached a “historical turning point” and that “peace, parity, democracy, and dialogue” should form the basis for contacts between the sides as a means to prevent intensifying antagonisms and differences.

Tsai said Taiwan would also work to increase its participation in international society, even as Beijing seeks to shut it out and poach allies away from the self-governing island democracy it claims as its own territory.

“We will not accept the Beijing authorities’ use of ‘one country, two systems’ to downgrade Taiwan and undermine the cross-strait status quo,” Tsai told an audience at the baroque Taipei Guest House in the center of the capital. Those in attendance were separated according to social distancing guidelines and some wore masks to guard against the spread of the coronavirus.

Tsai represents the ruling Democratic Progressive Party which advocates Taiwan’s formal independence, something Beijing says it will use force to prevent.

Her election to a second, four-year term came after the repression of pro-democracy protests in the nearby Chinese semi-autonomous region of Hong Kong solidified public opinion in Taiwan against moves toward accepting rule by Beijing.

The sides split amid civil war in 1949 and Beijing has cut off ties with Tsai’s government over her refusal to accept its demand that she recognize the island as a part of China to be unified with eventually under the “one country, two systems” policy enacted in Hong Kong.

Beijing’s diplomats have prevented Taiwan from joining international gatherings such as the World Health Organization and reduced its number of diplomatic allies to a handful, while its military has boosted patrols and exercises aimed at intimidating the island’s population.

In her speech, Tsai emphasized the need to boost national security, including against non-traditional threats such as cyber and “cognitive” warfare, defined partly by the use of disinformation on social media.

Tsai, 63, is a former law professor and unique in being the only modern woman leader in Asia to rise to the top without being part of a political dynasty.

Attending Wednesday’s speech were diplomats from Taiwan’s remaining 15 formal diplomatic allies and representatives of the U.S. and other major nations that maintain strong but informal ties with Taiwan. The U.S. is the island’s main source of military support against China’s military threats and a key advocate for its participation in international gatherings.

Prior to her address, congratulatory remarks from U.S. Secretary of State Mike Pompeo were read out praising Tsai’s “courage and vision in leading Taiwan’s vibrant democracy is an inspiration to the region and the world.”

“The United States has long considered Taiwan a force for good in the world and a reliable partner,” Pompeo said in the statement. “We have a shared vision for the region — one that includes rule of law, transparency, prosperity, and security for all.”

The U.S. support comes amid rising frictions between Washington and Beijing over trade, technology and allegations of Beijing’s mishandling of the coronavirus pandemic that began last year.

At the same time, Washington has increased military sales to the island of 23.6 million and Congress has passed legislation promoting closer political and economic ties.

Despite Beijing’s attempts to isolate it diplomatically and vastly reduce numbers of Chinese tourists visiting the island, Tsai has overseen steady growth in Taiwan’s high-tech economy and enacted social reforms, including making the island the only democracy in Asia to recognize same-sex marriage.

Reforms, including reductions in civil service pensions had sparked a backlash and Tsai had appeared vulnerable to a challenge from the pro-China Nationalist Party candidate. However, her support for the pro-democracy movement in Hong Kong in the face of an often-violent police response helped lift her poll figures. Many see China’s autocratic Communist Party as eroding Hong Kong’s civil liberties and Taiwanese voters have strongly rejected any moves toward political accommodation with Beijing.

Poll results released by the U.S.-based Pew Research Center last week found that 66% of island residents view themselves as Taiwanese, 28% as both Taiwanese and Chinese and 4% as just Chinese. The telephone poll of 1,562 people, conducted last fall, has a margin of error of 3.2 percentage points.

Among respondents under 30, fully 83% said they don’t consider themselves Chinese.

Another 2.3% of Taiwan’s people are members of indigenous groups who are not ethnically Chinese.

A former Japanese colony, Taiwan was handed to China in 1945 but split again from the mainland when Mao Zedong’s Communists swept to power on the mainland in 1949. The rival Nationalists, led by Chiang Kai-shek, fled to Taiwan, 160 kilometers (100 miles) across the Taiwan Strait from China’s east coast. 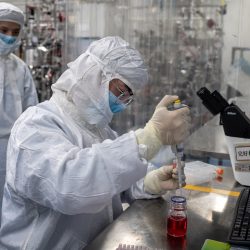 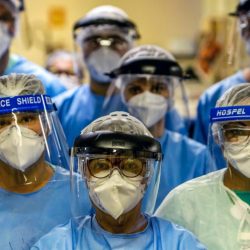