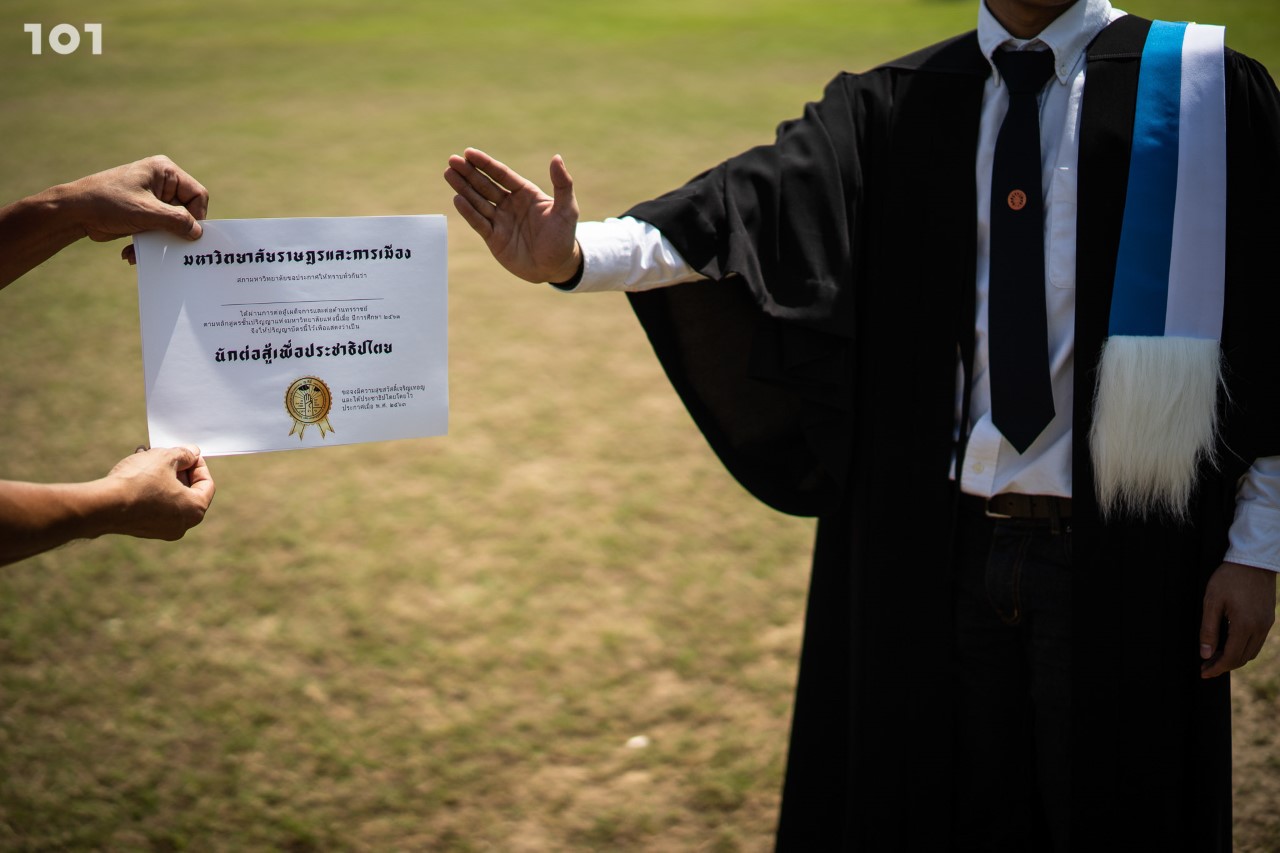 A Thammasat University graduate receives a mock degree at a campaign urging graduates to boycott the commencement ceremony on October 30-31. Photo from @freetupandit Facebook

Like other new graduates of Chulalongkorn University, probably Thailand’s most prestigious education institution,  Aomtip spent the afternoon happily posing with family and friends during commencement day early this month.

But as her classmates lined up for what was supposed to be the most important moment,  this 23-year-old chose to skip the conferment ceremony.

Aomtip, who asked for her surname to be left out, is one of the many who have decided to skip the ceremony – which for most graduates is considered to be a pivotal point for themselves and their families. Several students, who support the anti-establishment movement, are joining calls to boycott conferral ceremonies.

The young graduate launched a campaign with the hashtag #ไม่รับปริญญา, or #BoycottConferralCeremony to cheers at a protest organised by the Free Youth group on Bangkok’s Pathumwan Skywalk in August.

“It [the ceremony] costs a lot of money. The event should be a celebration for graduates, family, teachers and friends – it’s not necessary to hold it in a conference hall,” she told protesters.

A clip of her speech went viral and the hashtag top-trended on Twitter.

Aomtip’s act of defiance won full support from her family. Her mother, Kanokwan, said the family had discussed the issue and were happy with the young woman’s decision.

“The [graduation] ceremony is a kind of soft power used to shape youngsters. Deciding not to take part [in it] is a way of fighting against state power,” the mother said.

Aomtip’s campaign has now spread to other universities and been adopted by more and more new graduates.

Among them is Thammasat University, where less than half of the new graduates are expected to attend this year’s ceremony to receive their degree from His Majesty the King. Thammasat students are at the forefront of calls for royal power to be curbed.

Accompanied by HM the Queen, HM the King will hand certificates to graduates on October 30 and 31. The ceremony comes after four months of student-led rallies pressing for reform of the monarchy, the resignation of Prime Minister Prayut Chan-o-cha and changes to the Constitution.

Thai PBS World has learned that only around 48 to 50 per cent of Thammasat graduates attended the first and second commencement rehearsals this month.

In contrast, last year only about 10 per cent of graduates skipped the final ceremony, a source familiar with the matter said.

Around 9,600 graduates are eligible to attend the ceremony next week, but they must register and attend the final dress rehearsal last Saturday. Though the number of students at the dress rehearsal has not been revealed, it has fallen “drastically”, said the source who witnessed the event on Saturday.

A significant number of students withdrew their registration after riot police used water cannon against a large crowd of protesters at the Pathumwan intersection in central Bangkok on October 16, the source added.

Assoc Prof Dr Yukti Mukdawijitra, who teaches anthropology at Thammasat University, said on Twitter he expects more than 60 per cent of humanities and social science graduates to stay away from next week’s ceremony.

Assoc Prof Chalie Charoenlarpnopparut, Thammasat’s vice rector of Academic Affairs, put the low attendance down to ongoing anti-government rallies, the COVID-19 pandemic and the short notice given for the delayed ceremony, meaning students who travelled abroad might struggle to return in time.

The ceremony was originally scheduled for April, before the virus hit the country. Thammasat has also announced that strict COVID-19 prevention measures, including rapid finger-prick tests, will be conducted on every student ahead of the event.

Assoc Prof Chalie, who is organising the ceremony, spoke of a lively atmosphere at the dress rehearsal, which was attended by many of the graduates’ parents. However, not all the students at rehearsal would necessarily join the ceremony, he added.

“We won’t know how many will attend until they enter the conference hall,” he said.

A group of Thammasat students calling themselves the “Graduates of the People” last week launched a campaign urging classmates to boycott the graduation ceremony.

The group set up life-sized effigies of their reformist heroes at the university’s Tha Prachan campus in Bangkok. Students were invited to take selfies with cut-outs of Pridi Banomyong, 1932 Siamese Revolution co-leader, ex-prime minister and Thammasat founder; Puey Ungphakorn, ex-central bank chief and former rector of Thammasat; and exiled Thammasat academic Somsak Jeamteerasakul, an outspoken critic of the monarchy.

The group said students’ decision to skip the ceremony was an act of peaceful civil disobedience in support of reforming the monarchy.

The United Front of Thammasat and Demonstration was the first group in the current anti-establishment movement to call for royal power to be curbed. The unprecedented call was made in a 10-point manifesto for monarchy reform presented by its co-leader Panusaya “Rung” Sithijirawattanakul. She and fellow leader Parit “Penguin” Chiwarak have been arrested and charged with sedition and other alleged crimes over comments they made at previous protests.

Meanwhile Aomtip is encouraged to see many of her peers at Thammasat and Kasetsart universities now boycotting their commencement ceremonies.

“I’m happy that more and more people are joining my campaign,” she said. 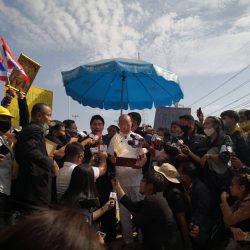