The Songkran festival in mid-April will determine whether the COVID-19 pandemic, which has wrought havoc for more than two years, will gradually transform into an endemic disease in Thailand after the easing of numerous restrictions, said Prof. Dr. Prasit Watanapa, dean of the Faculty of Medicine at Siriraj Hospital.

He noted that many people are expected to return to their homes in upcountry provinces and many others are expected to travel across provinces during the long break, resulting in more social interactions and group activities.

During last year’s Songkran, he said that the COVID-19 situation worsened, adding, however, that the significant difference between last year and this is that more people have been vaccinated and, though the Omicron variant is spreading faster than previous strains, it is less potent than previously dominant strains such as Delta.

Another difference, said Dr. Prasit, is that the infection rate after the New Year break, despite the relaxation of restrictions, remained stable, which, he pointed out, is a healthy sign that the public is being more compliant with safety measures.

He disclosed that, currently, there are about 2.2 million elderly people who are yet to be vaccinated, as he urged them to get inoculated before the holidays.

He also urged Songkran revellers, who are planning to travel, to self-administer rapid antigen tests and to wear face masks at all times while travelling.

Earlier in March, the National Communicable Disease Committee (NCDC) approved the Public Health Ministry’s plan to classify COVID-19 as an endemic disease starting on July 1st if things go according to plans.

According to the Centre for COVID-19 Situation Administration (CCSA), while some Songkran celebrations such as traditional water splashing processions, concerts and other activities, may be held this year, pre-approval must be sought from authorities for entertainment and recreational activities.

The Bangkok Metropolitan Administration (BMA) will hold a “new normal” Songkran celebration on April 12th-14th, in Ratchaprasong commercial district, but with no splashing of water. 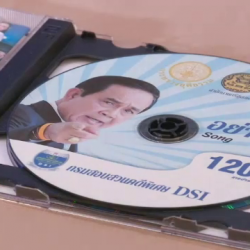