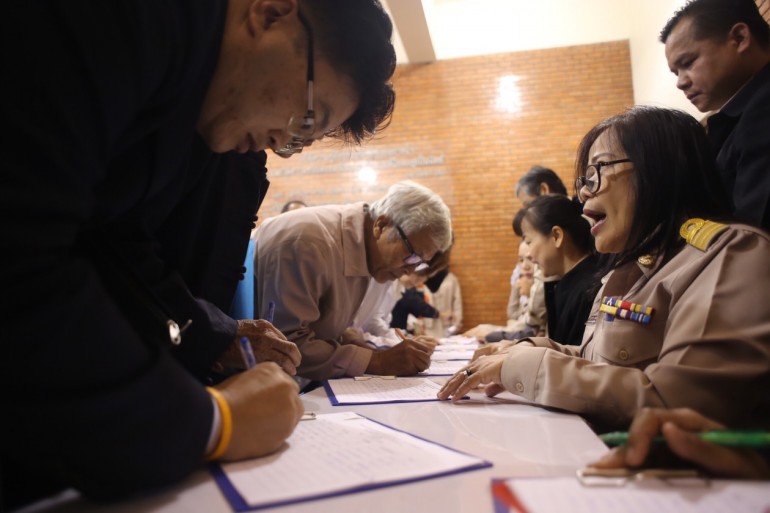 Accompanied by their supporters, election candidates flocked to registration centres across the country to register their candidacy in, what was described by Election Commission secretary-general Jaroongwit Poomma as, a trouble-free first day of registration.

Apparently wary of breaching any of the stringent election rules and regulations, the atmosphere at most registration centres, including the one at the Thai-Japanese youth sports centre in Bangkok, was subdued and lacked the usual fanfare that characterized the first day of candidacy registration in previous elections.

The only exception appeared to be the registration centre in Muang district of the northern province of Uttaradit where a Pheu Thai party candidate, Mr. Sarunvuth Sarunkate, arrived to register on horseback wearing an ancient warrior’s costume, complete with a sword.

Sarunvuth later told the media that he dressed up as an ancient warrior as a symbol of resistance against dictatorship.

EC secretary-general Jaroongwit said that the first day of registration went smoothly and no trouble has been reported, apart from a minor incident in Nong Bua Lamphu province where there was a temporary power failure. However, the electricity supplied was quickly restored.

He clarified that the EC did not ban parties from using campaign trucks to support the candidates on the hustings, but merely wanted to warn them to ensure that they do not breach election law.

He disclosed that only 49 out of a total of 106 registered political parties were qualified to field candidates to contest the March 24th poll.  However, he said that the parties which were not qualified have until February 6th to resolve such problems in order to qualify to contest the poll.

All registration of candidates closes on February 6th.  A list of the registered candidates, vetted by the EC will be announced on February 15th.