Thanks to better air circulation and morning breeze, smog condition in and around Bangkok has improved considerably with only 12 areas affected by excessive PM2.5 dust particles.

For the rest of 11 affected areas, PM2.5 particulate matter ranges from 51 microns to 59 microns.  On average, dust particles today are 4 microns less than yesterday’s day.

In the northern province of Chiang Mai, many people were seen wearing face masks as some areas in the province were found to have excessive amount of PM2.5 dust particles beyond the standard 50 microns reportedly caused by the burning of vegetation.

Associate Professor Seth Sampattakul, chief of the climate change data centre of Chiang Mai University, said that the smog problem in Chiang Mai was a matter of concern as it could pose health hazards to local residents.

However, he pointed out that the 50-micron standard set by the Pollution Control Department was too high, saying in many developed countries the amount of PM2.5 dust particles were set at much less than 50 microns. 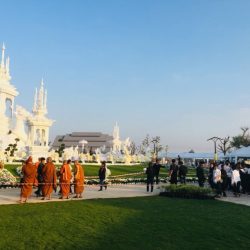