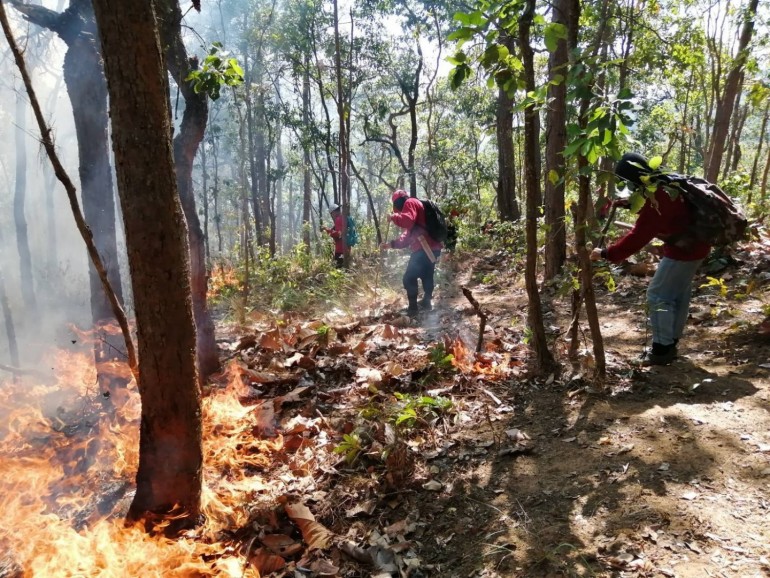 Smog problem in nine of Thailand’s Northern provinces is likely to get worse during March and April due to forest fires, despite a complete ban on the open burning of vegetation or trash.

Mr. Chongklai Worapongsathorn, deputy director-general of the Department of National Parks, Wildlife and Plants Conservation, today presided over a gathering of support fire fighters before they are sent to the northern provinces to fight forest fires which have been raging for weeks, belching PM2.5 dust particles and smoke into the atmosphere and threatening the health of the residents.

Helicopters have been placed on standby to provide support and a complete ban on open burning has been imposed from February 10th to April 30th in Lampang, Chiang Rai, Nan, Phrae, Phayao, Mae Hong Son, Chiang Mai, Lamphun and Tak. The level of PM2.5 particulate matter in Lampang ranges from 67-73 microns while 68 microns were reported in Tambon Jongkham, Muang district of Mae Hong Son.

Today, the Department of Pollution Control reported that the air quality in the seven northern and two northeastern provinces was below standard and labeled condition orange, meaning it now poses health hazards.

The country’s smog problem was upgraded to a national agendum by the cabinet on February 12th.