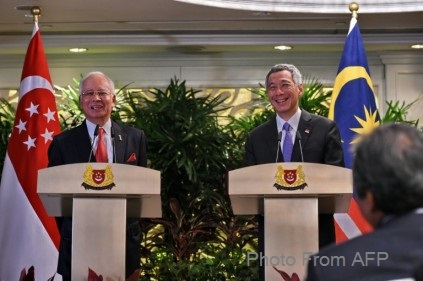 (Photo) The signing was overseen by Malaysian Prime Minister Najib Razak (L) and his Singapore counterpart Lee Hsien Loong, who proposed the idea together in 2013/AFP

SINGAPORE (Reuters) – Singapore and Malaysia have agreed to suspend the construction of a billion dollar train project linking the city-state to the southern Malaysian state of Johor, their transport ministers said on Tuesday.

The suspension marks a delay in yet another project since a new Malaysian government came into power last year pledging to tighten finances and review major deals.

The ministers announced at a joint press conference in Singapore that the delay will be until September 30 and that Malaysia will pay Singapore compensation for abortive costs.

“If by 30 September 2019, Malaysia does not proceed with the RTS (Rapid Transit System) Link Project, Malaysia will also bear the agreed costs incurred by Singapore,” Khaw Boon Wan and Anthony Loke said in a joint statement.

The project was estimated to cost around $1 billion.

Thousands of Malaysians travel back and forth to tiny but rich Singapore for work and school, and the transit system, which was due in 2026, is designed to carry up to 10,000 passengers per hour in each direction – more than 30 times more than the existing train service can accommodate.

“This does not mean that we are terminating the project,” Loke told reporters. “We just want to re-evaluate it so that this project can be executed more effectively.” 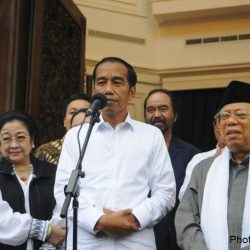