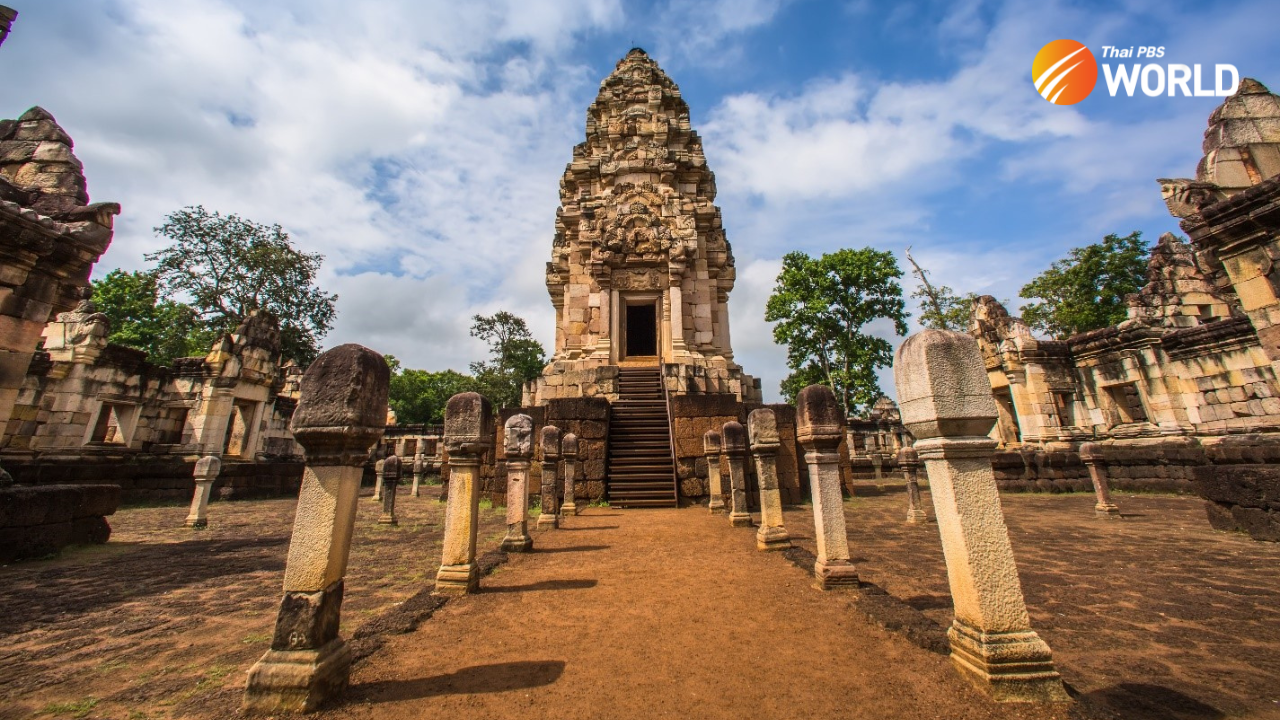 In the 1980s, the eleventh-century temple of Sdok Kok Thom in Sa Kaeo province wasn’t your typical tourist attraction.

Back then, this Hindu monument, an abode of Lord Shiva – theologically speaking – was Nong Samet, a camp for refugees fleeing Cambodia’s civil war. The ancient temple was in a terrible state, with pieces of laterite littering the ground and landmines buried all around the sanctuary. Tourism wasn’t an option. Those who came to Sdok Kok Thom were international workers from humanitarian agencies, warlords, gun runners, and black marketeers. Everyone gravitated to the “lawless” Nong Samet for their own business at the refugee camp.

Forty years later, everything has changed.

Today, Sdok Kok Thom is drawing small-time archaeologists, culture vultures, and even a princess to admire its beauty and significance.

Princess Maha Chakri Sirindhorn paid a visit to the Hindu monument in May for the Sdok Kok Thom Historical Park’s official opening ceremony. The painstaking restoration of the ancient temple is complete and the site now also boasts an exhibition center housing artifacts found during the excavation. If Sdok Kok Thom temple is good enough for the Princess to leave her royal palace, you can be sure that it is well worth setting off to Thailand’s eastern frontier and exploring the eleventh-century sanctuary.

At 90 kilometers in the east of Sa Kaeo Province and 150 km west of Angkor Wat in Cambodia, Sadok Kok Thom was part of the powerful ancient Khmer Empire. It was connected to other principal ancient Khmer sites, such as Prasat Phimai, Prasat Vat Phu in southern Laos, and Prasat Preah Khan of Kampong Svay, via the royal route network.

Built in 937 during the reign of King Jayavarman IV, Sdok Kok Thom was completed in 1052 when King Udayadityavaraman II was on the throne. Like many ancient Hindu monuments established in the lower Northeast of Thailand, Sdok Kok Thom was built to enshrine a symbol of Shiva, a Shiva Linga.

In its heyday, it’s said that the temple was tended by its Brahmin patrons and supported with food and labor by the people from the surrounding rice-farming villages. A century later, Hinduism began to die out, giving way to Buddhism.

Stories in the stone

Sdok Kok Thom temple remained abandoned for about a thousand years before Étienne Aymonier, the French explorer and linguist, began his visits and studies around the end of the 19th century. The discovery of the Hindu monument was a triumph in itself, but the French scholar considered the finding of the ancient inscriptions on the archaeological site to be even more significant.

The 340 lines of an ancient text on the stone slab provide a wealth of information about the early history of the powerful Khmer Empire and its “devaraja” religious civilization, or god-king cult. The inscription also provides information about how Sdok Kok Thom was created.

“Erected a stone temple with spire, dug a reservoir, built dikes, and set out fields and gardens,” is how the inscription describes the construction of the temple.

Building the Sdok Kok Thom temple took the Angkorian kings and other early builders more than a century. To reconstruct Sdok Kok Thom, a Thai archaeology team from the Fine Arts Department needed more than 10 years.

Following demining in 1995,  the reconstruction reversed the work of the early builders. The field was set out and excavated to define the reservoir and moats. The fallen stones were then brought back to their original placements and put back together using the anastylosis technique. The restoration was completed in 2010 with the reassembly of the main building’s spire.

All those involved both in the original building of Sdok Kok Thom temple and its reconstruction merit praise for their hard work.

As soon as you enter the Sdok Kok Thom Historical Park, you’ll notice that this ancient Hindu monument shares a layout with Angkor Wat with a reservoir, a causeway, moats, gopura and gallery. Look closer though, and you will notice a major difference. Sdok Kok Thom faces East, while Angkor Wat faces West.

As you follow the walkway to the center of the sanctuary, you will come to the main tower. The towering monument is meant to be Mount Kailash – abode of Shiva. You won’t find the Lord of Creation here though. The tower was built to enshrine Shiva Linga.

As an adjunct to the painstaking restoration, a new exhibition center has been added to the historical park for visitors wanting to learn more about the reconstruction and Angkorian arts and influence.