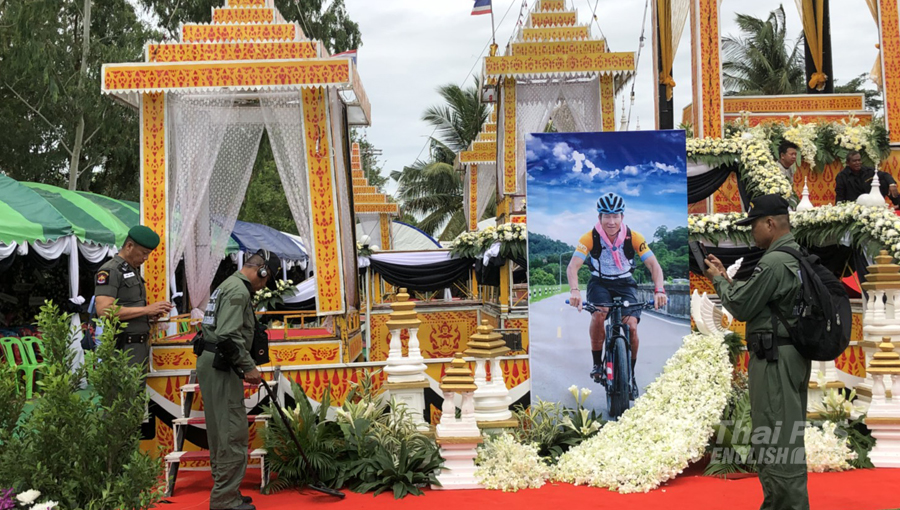 A large number of people have since this morning gathered at Wat Nong Khu temple in Tambon Muang Hong of Chaturaphak Phiman district in the northeastern province of Roi-et where a royally-sponsored cremation is scheduled to be held this afternoon for the late Petty Officer Samarn Gunan.

Petty Officer Samarn, a former member of the Thai navy SEAL, died while taking part in the operation to bring 12 young players of the Moo Pa Academy football team and their coach out of Tham Luang cave in Chiang Rai, where they were trapped for 18 days.

The royally-sponsored cremation for Petty Officer Samarn will be held today at 4pm.

Privy Councillor Surayud Chulanont will preside over the ceremoney on behalf of His Majesty the King.

Meanwhile, Ramkhamhaeng University has offered scholarships to children of farmers whose paddy fields were affected by flood waters diverted from Tham Luang cave during the high-profile rescue operation

University rector Wuthisak Larpcharoensap said the university want to show gratitude for the sacrifices made by these villagers.

During the operation to rescue the 12 players of the Moo Pa Academy football team and their coach stranded in Tham Luang cave, a large number of pumps were install to drain water out of the cave and surrounding areas to support the efforts. As a result, more than 1,200 rai of rice fields in three tambons of Mae Sai district were flooded and 126 farmers were affected.

Mr Wuthisak said in return for the farmers’ sacrifices, the university offers help to children of the affected farmers who register to study at the university’s Chiang Rai campus from the first semester of academic year 2018 by exempting them from tuition fees. They will be entitled to the scholarships until they finish their education with a bachelor’s degree.

The tuition fees exemption will also be extended to children of the affected farmers who are already studying at Ramkhamhaeng University’s Chiang Rai campus.

No special treatment for citizenship for 4 "Wild Boars"