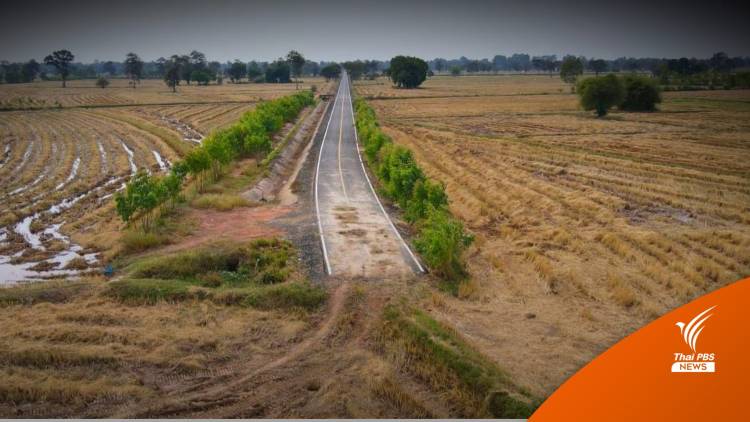 The mysterious asphalted road running to nowhere through a rice field in Maha Chaichana district of the north-eastern province of Yasothon, which has been the subject of an investigation by the local office of the National Anti-Corruption Commission (NACC) and which locals suspect may be linked to graft, is apparently just an embankment, not a road.

Over the past weekend, the provincial NACC chief visited the site and questioned representatives of the local Rural Roads Department, the provincial irrigation office and the Fa Yad sub-district (Tambon) Administrative Organization. They all maintained that they knew nothing about it.

After several days of head scratching and denials from local authorities, officials from the Ubon Ratchathani-based irrigation projects went to Yasothon on Monday to explain the matter to the NACC office.

They reportedly claimed that the two-kilometre-long road is just an embankment, running parallel to a dry irrigation canal, built to the road design of the Rural Roads Department to promote the use of para rubber in road construction, to help rubber growers suffering from low prices.

The road, or embankment, is fitted with a solar lighting system, but farmers have complained that the lighting is affecting their rice plants and there is no water in the irrigation canal. Villagers also say that the embankment is a waste and is used by youths for motorcycle racing.

The village head said that he had not been informed by any agency about the road project, but admitted he saw some workers building the road about three months ago.

Two Pheu Thai MPs, Piyawat Pansaichua and Boonkaew Somwong, said that they will submit an interpellation to parliament to ask the government about the project.

Compensation for nightlife businesses and employees to be proposed to CCSA