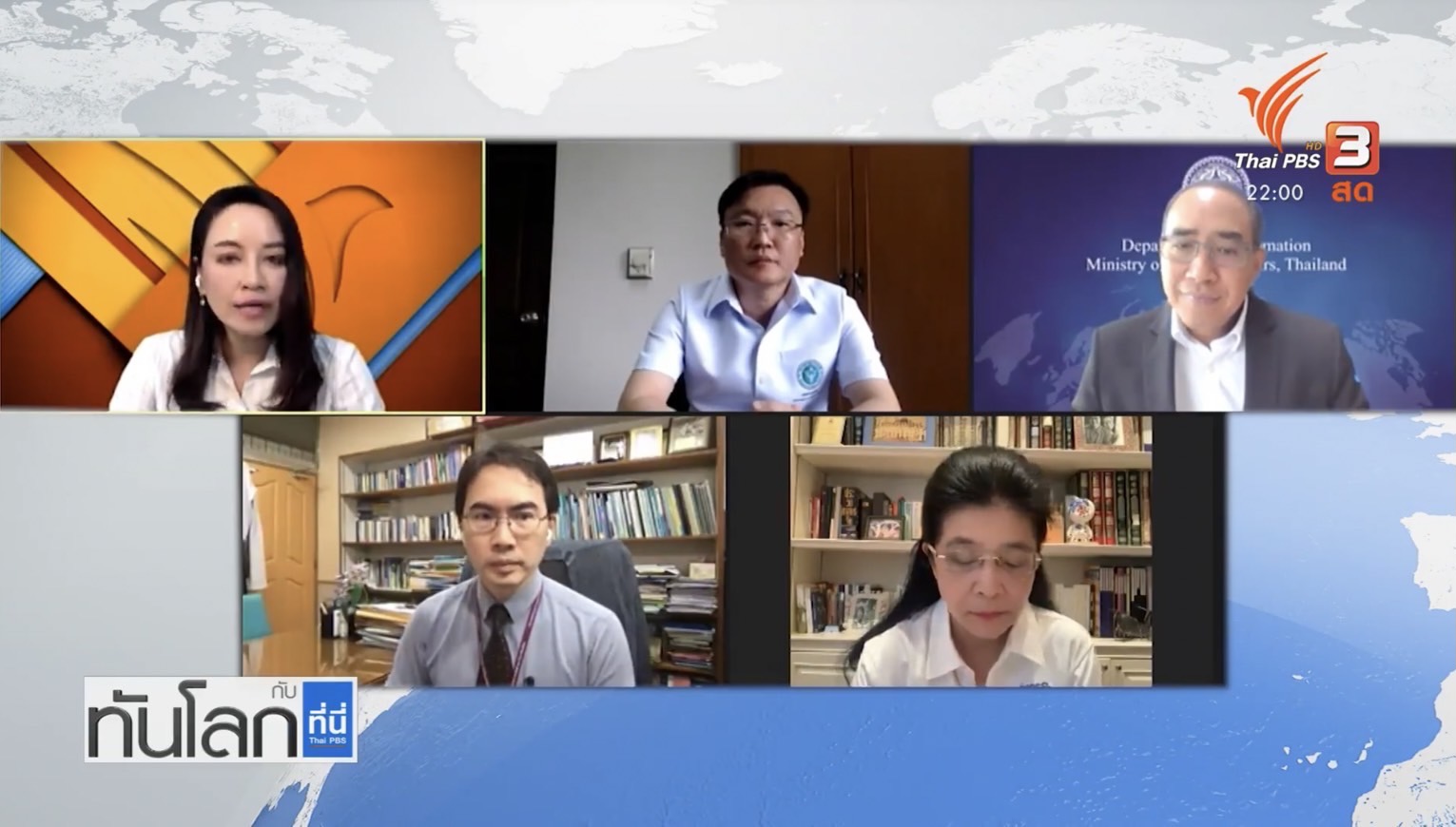 A carefully-crafted national public health plan with proactive diplomacy can help Thailand to participate in global health development and deal with emerging diseases in the coming decades, suggested a panel of experts.

The strategy will reposition health spending, not as a burden but as an investment in the country’s health infrastructure and exports. “But the thinking, planning and management will have to change, right through to the development of human resources and products, said Dr. Borwornsom Leerapan of the Faculty of Medicine Ramathibodi Hospital at Mahidol University.

He was speaking at a webinar called “Public Health, COVID-19 and Diplomacy” last Thursday, co-hosted by the Surin Pitsuwan Foundation, Chiang Mai University’s School of Public Policy, Thai PBS and Asia News Network. The webinar was moderated by Nattha Komolvadhin from Thai PBS.

As a middle–income country, Thailand has substantial public health infrastructure, including some of the most capable doctors, nurses and medical academics in the region, legions of national health volunteers, a production facility which is now producing COVID-19 vaccines under license from AstraZeneca and Oxford University, COVID-19 vaccines developed by Thai universities, which are now in formal trials, and reputable private hospitals.

Thailand is also the organiser of the prestigious Prince Mahidol Award, an annual event along the lines of the Nobel prizes in medicine and public health. The parallel annual international conference also draws some of the world’s best known experts in academia, research and the medical profession from all over the world for an exchange of views, updates on research and informal networking.

He added that a new national health plan can be crafted, to increase Thailand’s capabilities in dealing with emerging diseases, but it will require coordinated work among related ministries and the private sector. Vaccine production would be one area Thailand can develop further through international cooperation.

“COVID is an opportunity for us to link East and West. It will be of greater importance to Thailand, if we can formalise and be serious about it. The government should put serious resources into R&D on emerging diseases,” said Khunying Sudarat Keyuraphan, Chairperson of Thai Srang Thai Party and former Public Health Minister.

She also stressed that working unity among government agencies and stakeholders as essential in the battle against COVID-19 and successful diplomatic initiatives.

Tanee Sangrat, the Foreign Ministry’s spokesperson, said that diplomatic efforts to acquire vaccines for the country in the past year have been done through close coordination with the Public Health Ministry.

The joint negotiations for vaccine donations and swaps have procured a total of 5.8 million doses to date and involved many countries, including China, Japan, US, UK, Switzerland, India, S Korea, Hungary, Singapore, Spain and Bhutan.

He said the ministry also looks to support neighbouring countries, especially Myanmar, regarding the availability of vaccine supplies. While some 1 million doses have been given to Myanmar migrant workers here, the close proximity of Myanmar means that Myanmar and Thailand’s wellbeing is seen as “one”.

“We have to contain it (the pandemic) together with Myanmar. It is as important and is as much of a priority as looking after Thais,” said the Foreign Ministry official.

Tanee admitted that COVID-19 represented a new challenge in the world of diplomacy. The Foreign Ministry also has to look after some 1.6 million Thai overseas, to ensure that they receive adequate health services.

More than 400,000 certificates of entry (COE) were issued for incoming visitors in the past two years and a new web-based “Thailand Pass” was to be launched on Nov 1st.

Thailand also initiated the setting up of the COVID-19 ASEAN Response Fund, to buy vaccines for 10 ASEAN members. ASEAN also has a cooperation with the US on vaccine reserves and medical equipment for future emergencies. The US recently announced the setting up of a regional CDC headquarters in Vietnam.

ASEAN and China are in discussions over the setting up of vaccine manufacturing facilities in the region and are talking to India on a post COVID-19 economic recovery plan.

“We have allies in the West and East and we used to be at the centre, with both sides competing for our interest, like a beautiful woman….but, in recent years, our importance has diminished. It is disappointing,” she said.

Sudarat said there is little room for complacency, as the country will need to prepare to source more vaccines as boosters and to deal with variants in the coming years. Thailand could also do with more rigorous collection of data and information, to exchange with foreign partners. “We must have self–respect, not just to take but also to give.”

“Diseases will keep emerging, so cooperation in academia and diplomacy should lead to learning from other countries, to prepare for emerging diseases long term,” she said.

Sudarat was in the US in September and had an opportunity call on Thai-born US Senator Tammy Duckworth, who helped to convince the White House to supply vaccines to Thailand on an emergency basis.

Tanee praised Thais living overseas for being part of the country’s soft power, helping to establish good relations that can lead to positive diplomatic outcomes.

Mahidol University academic Borwornsom Leerapan took a step back to note that diplomacy has been a key factor in containingthe pandemic, which is a global crisis that can’t be resolved within a country or on its own.

“There have to be global platforms, to work together. The question is whether we have the resources or assets to contribute at global level,” he said.

He said the Prince Mahidol Award is one of the resources which Thailand has developed for decades. The candidates are selected based entirely on merit. The winners over the decades know about Thailand, its teams and its context. These contacts provide a network of informal exchanges, of which the Thai side can make inquiries, find information and knowledge, to help solve problems and even to work on global health initiatives together.

Dr. Anthony Fauci, the respected American physician and advisor to the White House, is among the winners. He has also spent time working in Thailand and knows many Thai medical officials.

At the same time, the Prince Mahidol Award Conference was initiated, as a parallel event to increase Thailand’s contribution to global public health development. The forum usually takes place in late January or early February.

The Prince Mahidol Award Conference is an ideal platform for global health diplomacy. It was designed to not just be all about academic matters, but policy and related issues at a global level.

Participants in the event embrace policy movement, dialogue and productive debates. It is quite open and allows the setting ofnew agenda for society at the global health level, although there are no formal commitments as in the diplomatic circle, Borwornsom said.

The Prince Mahidol Award has a program for young Thai medical professions to study and train overseas and, in their spare time, they can provide health services to Thais living in their respective host countries, said Tanee.

Tanee also agreed with Borwornsom on the need to get more middle and high ranking Thai officials to work in international organisations, to participate and influence global policies.

“We need to build up human resources to work in international organisations, in which Thais appear to underperform. Thais use very little of the quota, especially those who are technicalexperts. We need to be proactive,” said Borwornsom.

The Public Health Ministry’s Sophon said close working with international partners has been useful. “We have a US CDC (Center for Disease Control and Prevention) attached to the ministry. With this, we have been able to exchange information since start of the COVID pandemic.”

Many embassies have health attachés to look after their citizens in Thailand. They are in contact with the ministry. “If we can have MOPH officials at embassies overseas, to look after Thai people there and also to build relations with host nations on health knowledge and cooperation, it is something we should plan for, after this COVID pandemic,” Sophon added.

Sophon said, many years ago, Thailand used to produce its own vaccines. It’s only in the past couple of years, with COVID-19,that the initiative has been revised. There are several upstream projects in the pipeline with international partners, including mRNA vaccines by Chulalongkorn University. “We have R&D budgets to support and maintain the momentum to grow in the future.”

He said international acceptance of the quality of vaccines,produced under license from Astra Zeneca by Siam Bioscience, with a capacity of 200 million doses a year, have added to the reputation of Thai human resources.

They have not practiced “vaccine nationalism”, by banning local production for export, and this has also been a boon for Thailand’s international reputation.

Borwornsom said there have been discussions for some time on the possible production of influenza vaccines, in preparation for an outbreak, as well as the development of mRNA vaccines for other diseases, such as cancer.

He said the support for these initiatives can be a game changer,with public health spending no longer being seen as a burden, but as productive investment. They will, however, require a host of support measures, as well as drawing on the resources of all stakeholders, including medical staff in both the state, academicand the private sectors. “We also need diplomacy among our own various agencies (to get it going)”

The academic did not rule out Southeast Asian nations working together and joining hands to invest for the region, which boasts a sizable market.

He cited the example of Cuba which, despite being poor, is able to produce vaccines for export. Cuba also crafted diplomatic success from it.

“If we can do this ourselves we will have additional bilateral and multilateral negotiating powers. We can earn prestige and honour for the country with pride. We should, however, have a long term roadmap for this, rather than trying to solve the immediate crisis, as an ongoing effort,” said the Mahidol academic.

Tanee stressed that diplomacy works on national needs, adding“It can’t stand alone, it depends on the needs and capabilities of the country.” 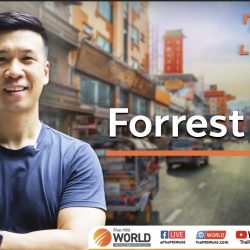 How different cultures shaped a YouTuber into a new person 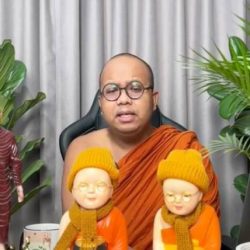