Anti-government protesters have agreed to take a step back, as proposed by Prime Minister Prayut Chan-o-cha, but have demanded, nonetheless, that he steps down within three days and drops all charges against the detained protesters.

The Prime Minister said, in his televised address to the nation this evening, that he will take the first step back from the brink and appealed to the protesters to respond in kind.

The protesters started gathering at Bangkok’s Victory Monument at about 4pm today (Wednesday) and, when the crowd had grown an hour later, they began to move toward Government House, via Phya Thai Road, only to be blocked by lines of police behind razor wire and barriers at Urupong.

The protesters managed to break through the blockade and continued to march toward Government House, via Phitsanuloke Road to Chamaimayarachet Bridge, where another blockade had been erected to protect Government House.

Police also used buses in the barricade, with water cannons on standby behind the police lines.

Some protesters climbed onto the top of a bus to deliver anti-government statements and to repeat their demands for the Prime Minister’s resignation. They shew what they said was the oversize resignation letter from the prime minister. The crowd dispersed at about 9:30pm, after handing that letter to Pol Lt-Gen Pakkapong Pongpetra, the Commissioner of the Metropolitan Police.

The protesters have threatened to return in three days if the Prime Minister refuses to resign. 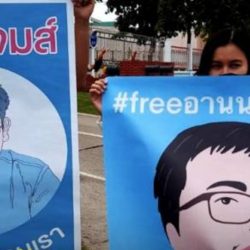 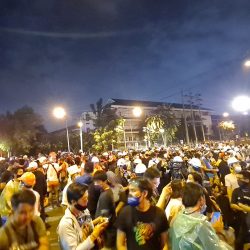 Will special Parliament session be a time-buying tactic?