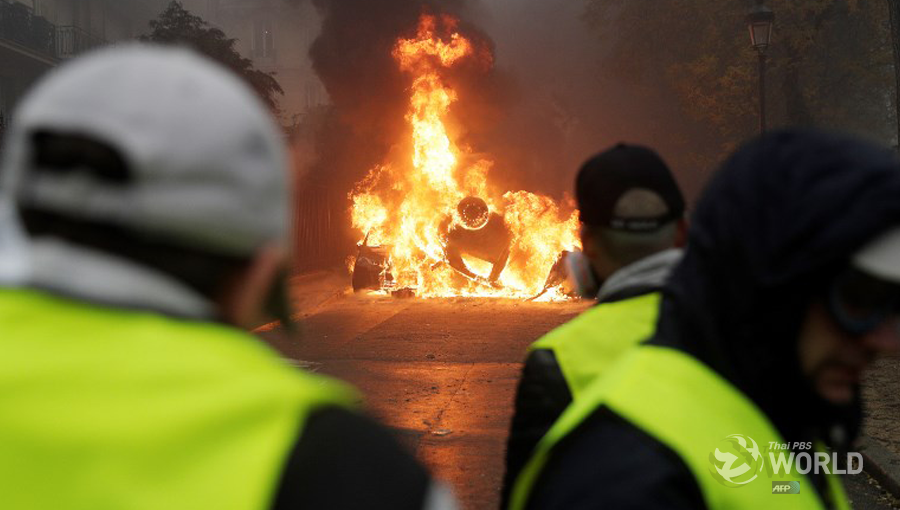 Demonstrators stand in front of a burning car during a protest of Yellow vests (Gilets jaunes) against rising oil prices and living costs, on December 1, 2018 in Paris Speaking at the Paris police’s command centre, French Prime Minister said 36,000 people were protesting across France, including 5,500 in the capital for this 3rd nationwide day of blockade ands demos.

Police fired tear gas to disperse protesters trying to tear down barricades on the Champs-Elysees in Paris on Saturday as hundreds converged on the city for new demonstrations, with anger over fuel taxes morphing into a wide-ranging anti-government movement.

Clashes between police and demonstrators wearing high-visibility yellow vests, the symbol of the protest against President Emmanuel Macron, broke out soon after crowds began gathering near the Arc de Triomphe, at the top of the famous avenue.

The Champs-Elysees itself was on lockdown, its glittering Christmas decorations standing in stark contrast to boarded-up storefronts and throngs of riot police manning barricades and water cannon.

Some officers, wearing protective gear and helmets, were spattered with vivid yellow paint and targeted by protesters throwing rocks or construction barricades, or wielding slingshots.

Interior Minister Christophe Castaner said there were 200 “peaceful” demonstrators on the Champs Elysees, while “1,500 agitators outside the security perimeter came to fight”.

Banks, wine shops and cafes on surrounding streets raced to cover up windows on Saturday, as the acrid odour of tear gas and burning trash containers filled the air.

Other protests were taking place around France by people angry over a surge in fuel prices this year which they attribute to a series of tax increases to finance the government’s anti-pollution efforts.

“With all these tax hikes, there’s not much left for eating at the end of the month,” Philippe, a high school cook in the Essonne region outside Paris, said near the Champs Elysees on Saturday.

The protests come a week after violent clashes on the avenue last Saturday, marked by burning barricades and vandalism which Macron compared to “war scenes”.

Some 5,000 officers have been mobilised and were carrying out ID checks and searches for people hoping to reach the Champs Elysees.

“Our responsibility is to ensure that everything goes as well as possible,” Interior Minister Christophe Castaner said while touring the forces on the avenue.

Castaner had already said on Thursday that “far left and far right activists” were preparing for fresh clashes with the police. 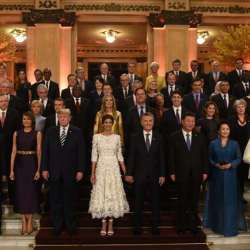 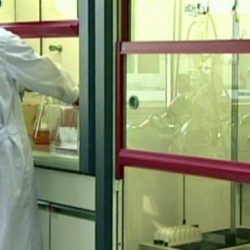