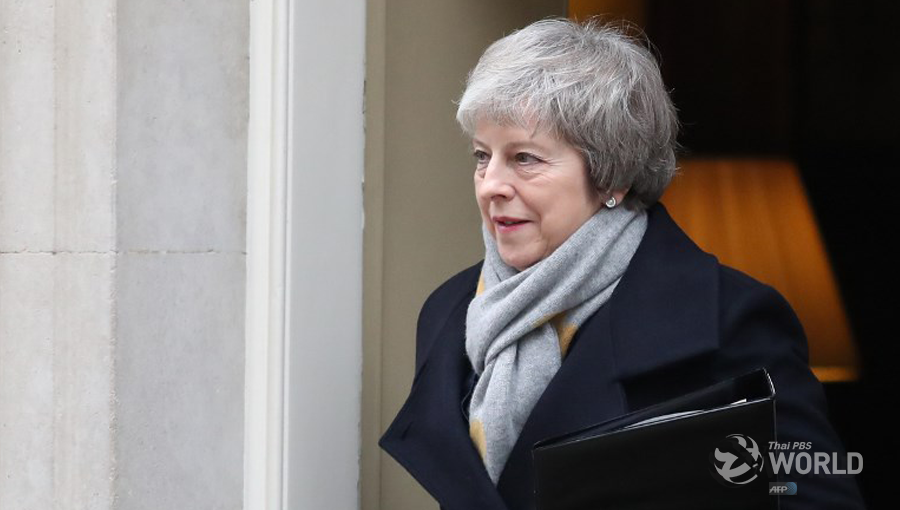 LONDON (AFP)   — British Prime Minister Theresa May is facing defeat over her Brexit deal when MPs vote later on Tuesday, deepening the crisis in British politics ahead of the country’s scheduled departure from the EU on March 29.

She urged restive MPs to think again about rejecting the EU divorce deal, on the eve of a crucial parliamentary vote that could scupper the agreement.

May warned lawmakers that rejecting it risked either a chaotic no-deal scenario or subverting British democracy by blocking Brexit.

“Whatever you may have previously concluded, over these next 24 hours, give this deal a second look,” May told MPs in parliament.

The vote on Tuesday (Bangkok’s early Wednesday morning) was meant to take place in December but was postponed, with May facing certain defeat.

She sought assurances from Brussels that would assuage MPs’ concerns over the so-called Irish backstop arrangement.

It is the most contentious element which would keep Britain tied to some EU trade rules, with even closer alignment for the province of Northern Ireland, if and until another way was found to avoid border checks with the Republic of Ireland.

European Commission President Jean-Claude Juncker and European Council President Donald Tusk repeated in a letter Monday that they would not reopen the divorce deal, but offered clarifications with “legal value” on the controversial clause.

May admitted their offer fell short of what she wanted, but said MPs now had the clearest assurances they were going to get from the EU — and should support the deal.

She warned MPs of “the consequences of voting against this deal”, saying a no-deal Brexit risked breaking up the United Kingdom, while the alternative of blocking Brexit “would be a subversion of our democracy”.

But as MPs prepare to vote on Tuesday evening, large numbers of her own Conservative MPs and her Northern Irish allies remain strongly opposed.

In a further setback, government whip Gareth Johnson — a Brexiteer and one of the officials charged with getting MPs to vote for the deal — announced his resignation.

“It is clear this deal would be detrimental to our nation’s interests,” he said.

In a speech in Stoke, a Brexit-supporting city in the English Midlands, May repeated that the only way to avoid “no deal” was to support her agreement.

“If no deal is as bad as you believe it is, it will be the height of recklessness to do anything else,” she said.

But with growing calls to delay Brexit or call a second referendum, she added: “It’s now my judgement that a more likely outcome is a paralysis in parliament that risks there being no Brexit.”