Prayut will not quit, warns against “foreign interference”

Prime Minister Prayut Chan-o-cha last night reaffirmed that he will not step down as demanded by anti-government protesters and opposition MPs and warned his political opponents against “using foreign forces” to destabilize the country.

“I am not going to walk away while the country is still facing a crisis,” he said in his closing remark at the two-day extraordinary parliamentary session on the current political crisis.

Prayut came under heavy attacks throughout the debate which saw many of the opposition MPs openly siding with the ongoing protests aimed at removing the prime minister and having the constitution amended.

Kao Klai Party leader Pita Limcharoenrat on Tuesday also made a lengthy plea for a reform of the monarchy during the debate.

The opposition MPs said Thailand’s economy under the leadership of Prime Minister Prayut has been a shambles and held him responsible for the ongoing political crisis. They called on him “to make sacrifices” by resigning.

Defending his records, Prayut pointed out several of the infrastructure and development projects implemented under his watch to refute accusations that he was a failure.  He also touted his government’s success in dealing with the coronavirus pandemic.

“Would you be happy to have victory amid the rubble? Would it be worth it?” he asked in an apparent reference to the ongoing street protests which his government believes are being fueled by certain quarters of opposition politicians.

He accused his opponents of using students as a tool for their political purpose and cautioned them against allowing “foreign forces” to interfere in the country’s domestic affairs.

“Don’t open the door to foreign forces to interfere with our sovereignty. This is extremely dangerous,” Prayut said without mentioning names.

His warning came a day after thousands of protesters rallied at the German Embassy in Bangkok to call on the German government to launch an investigation into the frequent visits to Germany by the Thai monarch.

Prayut also insisted that he will continue in office to serve the country.

“I will stay on until I don’t have the opportunity to do what I am obliged to do. Is my answer clear enough?” he said at the closing of the debate.

During the debate, the Democrat Party proposed the setting up of a reconciliation panel consisting of key players in the ongoing political conflict.

House Speaker Chuan Leekpai said a working group will be set up to study the proposal which is aimed at finding common grounds among all stake-holders to resolve the conflict. 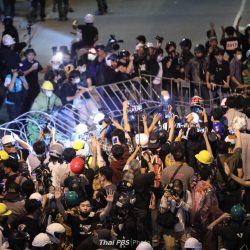