Saturday, October 20, 2018: Gen Prayut Chan-o-cha returned from Belgium today and joined Thaksin Shinawatra and new Army chief Apirat Kongsompong in saying predictable things. The participation in Asia-Europe Meeting was a success, Prayut said, adding that all foreign leaders he talked to “understood” the Thai situation and considered the country to be stable. He also said critics were reading too much into Apirat’s comments about coup the other day.

Prayut suggested he planned to update his Facebook on the trip.

Friday, October 19, 2018: It was a relatively calm day in politics, despite statements by the new Army chief and Thaksin Shinawatra getting angry feedbacks from those opposed to them. Both of them have said nothing unexpected, in fact.

Thaksin said in an interview overseas that if a Pheu Thai-led coalition won about 300 constituency seats, a civil rule in Thailand would be highly possible. Technically, a 300-MP camp would need another 76 votes to win post-election control. Politically, though, if a camp has 300 MPs in the pocket, the number will prompt talks, calls and campaigns regarding the role of the Senate, which is provisionally empowered by the Constitution to join the House of Representatives in selecting the post-election prime minister.

Opponents of Thaksin booed him, of course, just as anti-military critics slammed new Army Commander-in-Chief Apirat Kongsompong for not totally ruling out the possibility of another coup. As many have pointed out, however, the Thai history shows it’s totally irrelevant whether the military rules out a coup or not. In other words, Apirat should have been praised for being honest rather than being criticised for not making a promise that might not be kept after all.

Thursday, October 18, 2018: If following on the social media is any indication, military-backed Prime Minister Prayut Chan-o-cha is not doing too bad. Actually, of all prime ministerial candidates, the number of his Facebook “likes” is second to only Democrat leader Abhisit Vejjajiva, who had been there long before him. Prayut, as of 7 pm today, has more than 500,000 “likes”, compared with around 250,000 a couple of hours earlier. Sudarat Keyuraphan, tipped to be his key challenger at the moment, is way, way behind in the number of likes.

Abhisit has millions, but that number took years to accumulate. Thanathorn Juangrungruangkit, is also nowhere near Prayut when it comes to the number of Facebook “likes”. All the chasing pack can, however, take comfort in the words of wisdom from a Facebook user. “There’s no dislike button, and that is significant politically,” he said.

Meanwhile, in the first public statement in his new position, Army Commander-in-Chief Apirat Kongsompong made what appeared to be a textbook speech, saying his troops will “always stay on the people’s side”. He was elusive on the Army’s stand regarding the Palang Pracharat Party, considered a political force backing Prayut as the post-election prime minister, saying soldiers don’t know how to play politics but they will “have to be very careful from now on” because the public would scrutinize their every move. 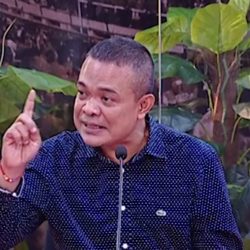