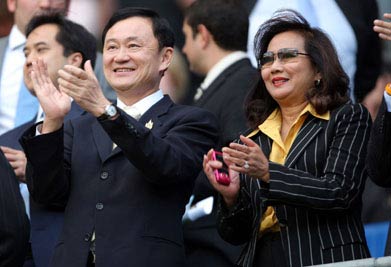 Behind every successful man there stands a strong woman, goes the old saying.

And no one illustrates this better than Khunying Potjaman Na Pombejra, who has taken much credit for the success of former prime minister Thaksin Shinawatra – her ex-husband – in both business and politics.

Despite their divorce in 2008, Potjaman still acts as the de-facto matriarch of the Pheu Thai Party, which is viewed as Thaksin’s proxy, although she holds no executive post.

In public, Thaksin’s ex-wife, 63, has been careful to distance herself from involvement in Pheu Thai’s internal affairs. But it’s no secret that behind the scenes, she still wields plenty of clout in Thailand’s largest opposition party.

After Potjaman was granted a rare audience with Their Majesties the King and the Queen on September 24 – during which she was seen prostrating herself in front of His Majesty – there followed a series of rapid changes in Pheu Thai.

Chief party strategist Khunying Sudarat Keyuraphan and her team resigned the following day, and party leader Sompong Amornvivat stepped down 24 hours later, resulting in the termination of the executive board.

Party sources say the mass resignation was prompted by Potjaman’s intervention in a bid to energise the party, which is losing support among young voters to fellow opposition party Kao Klai (Move Forward).

The resignations prompted a shake-up of the party’s executive committee and coincided with the adoption of a new party logo, to “fit with changing circumstances and the changes in the party”, said acting leader Chusak Sirinil.

He also dismissed media reports of Potjaman’s intervention, saying he “detected no sign that she would play a more active role in the party”.

A Pheu Thai general meeting on Thursday (October 1) re-elected Sompong as party leader, but new faces were appointed to other leadership posts while some recently-resigned executives were handed new roles.

Observers expect the new leadership will be more willing to compromise with the government camp, though Chusak has insisted Pheu Thai will remain in opposition and not join the ruling Palang Pracharath to form a national government.

Return to the limelight

Potjaman’s return to the limelight came after rumours grew that she and Thaksin were increasingly alarmed by how the previous Pheu Thai leadership appeared to be leaning more and more towards political and activist groups calling for reform of the monarchy.

Political analysts interpret Potjaman’s re-emergence as a strong signal that she and Thaksin want to see Pheu Thai step back from the “brink”.

Thaksin – Pheu Thai’s patriarch – has opted to live in self-exile overseas since fleeing Thailand in 2008 to escape legal troubles that stem from his time as prime minister from 2001 to 2006.

The ex-premier is thought to be pulling the strings behind the party, which ruled before being ousted by the 2014 military coup.

Prior to her recent Royal audience, Potjaman rarely made the headlines. So far, she has stayed silent about her dramatic reappearance in public life, leading to wild speculation culminating in rumours that Thaksin may return to lead a “unity government”.

Political observers describe Potjaman as a lady of few words but strong actions – most of them behind the scenes.

Even during her days as wife of the prime minister, Potjaman maintained a low profile, rarely being seen in public with Thaksin.

However, sources reported that she was playing an active role behind the scenes on behalf of her then husband. Many crucial decisions were made by Thaksin only after Potjaman gave them her blessing, observers said.

She reportedly even went as far as meeting influential media figures to win them over to her husband’s side.

As PM, Thaksin made no secret of his disdain for media outlets critical of him and his government. He developed a strategy of co-opting media either through friendly persuasion or by playing hardball, according to sources.

She attended St Joseph Convent School before moving to study in the United States. She graduated with a bachelor’s degree in Business Administration from Eastern Kentucky University, where Thaksin received his master’s degree in criminal justice.

In 1976, Potjaman and Thaksin married in Thailand before returning to the US, where the young husband completed his studies. Two years later, Thaksin was awarded a doctorate in criminal justice at Sam Houston State University in Texas.

Potjaman worked with Thaksin on his various business ventures in the late 1970s and ’80s. She helped run his small Shinawatra Computer firm, which eventually grew to become telecoms giant Shin Corporation PLC.

When Thaksin decided to enter politics in the mid ’90s, Potjaman threw her support behind him. “He told me he wanted to give back to the country,” she once said. Potjaman became the largest financier of Thaksin’s Thai Rak Thai Party, whose election victory led to his two tenures as prime minister.

In January 2006, the Shinawatra family’s sale of their entire stake in Shin Corp worth Bt73 billion – exempt from capital gains tax – marked the beginning of Thaksin’s political downfall.

Public anger that the sale of national assets had earned massive revenue completely tax-free triggered street protests against Thaksin’s administration, which culminated in a military coup in September 2006.

In September 2008, Thaksin was found guilty of abusing his power to engineer Potjaman’s 2003 purchase of land in Bangkok’s coveted Ratchadaphisek area for a price much lower than its market value.

Potjaman was acquitted of any wrongdoing but Thaksin was sentenced in absentia to two years in jail – a verdict he branded “politically motivated”.

By that time, the couple were abroad, having been allowed to leave Thailand to attend the Beijing Olympics. The acquitted Potjaman returned to Thailand after registering her divorce with Thaksin at a Thai consulate in Hong Kong in November 2008.

In July 2008, the Criminal Court sentenced Potjaman and her brother Bannapot Damapong to three years in jail each after finding her guilty of colluding to evade tax worth Bt546 million in the 1997 transfer of Shin Corp shares.

However, the Appeals Court in August 2011 acquitted Potjaman on grounds there was insufficient evidence against her. But Bannapot was found guilty of tax evasion although his sentence was reduced to two years and a Bt100,000 fine was imposed.

After the divorce, Potjaman used her father’s surname, Damapong, for a while before switching to her divorcee mother’s maiden name, Na Pombejra.

Critics said the Shinawatras divorced for reasons of political expediency, pointing out that the break-up shielded Potjaman from Thaksin’s problems with the law involving their common assets and from the trouble of having to seek her husband’s consent in making certain legal commitments. 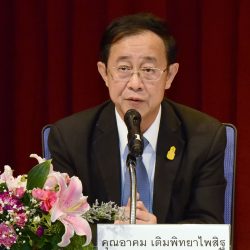