The Metropolitan Police have launched an investigation into who fired shots, damaging three police buses near the Ratchayothin tunnel, late on Saturday night.

Pol Lt-Gen Pakkapong Pongpetra, commissioner of the Metropolitan Police Bureau, told the media on Sunday that that bullets, of unspecified caliber, punched holes in each of the windshields of the three buses, but caused no injuries. The buses were about to leave the scene of the protest near the Criminal Court on Ratchadapisek Road, to take officers back to the Region 1 Border Patrol Police headquarters in Pathum Thani province.

The police commissioner said that police booked Piyarat Chongthep, alias Toto, head of the WeVo guards, and three other guards at the car park of Major Ratchayothin shopping mall, after they found 15 slingshots, 50 steel pellets, 300 glass pellets, 30 smoke bombs, 30 plastic bags containing fermented fish, 13 crash helmets, 37 bullet-proof vests, a teargas canister and a police shield in their shoulder bags. He claimed that the non-lethal weapons were to be used to trigger violence at the protest site.

Protesters from the ReDem (Restart Democracy) group, a radical offshoot of the Free Youth movement, allegedly attacked two prison trucks and freed several protesters, who had been arrested during the protest last night. He disclosed that seven police were injured and nine prison trucks were damaged during an outbreak of violence.

Meanwhile, core leader of the anti-establishment Ratsadon group, Panusaya “Rung” Sitthijirawattanakul, showed up at Samranrat police station today, to acknowledge charges related to the protest on February 13th at the Democracy Monument, during which protesters wrapped a huge red cloth around the monument.

She said that she was the last person summoned by the police to acknowledge the charges of breaching the Emergency Decree, the Communicable Disease Act and the Cleanliness Act in connection with that protest.

City Hall is demanding five million baht from protest leaders in compensation for the damage caused to the pot plants and other structures around the monument. Rung claims that the compensation claim is too high.

Rung and the other key members of the Ratsadon group are due to appear before the public prosecutor tomorrow (Monday) to learn whether they will be indicted for their roles in the protests at Thammasat University and Sanam Luang on September 19th and 20th.

Four other core leaders of the group, namely Parit Chiwarak, Anon Nampa, Somyos Prueksakasemsook and Patiwat Saraiyaem, have already been indicted in connection with the same protests and are being held on remand after the Criminal and Appeals courts rejected their bail requests. 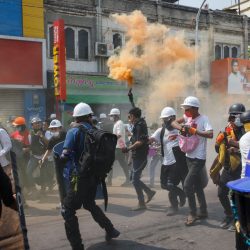 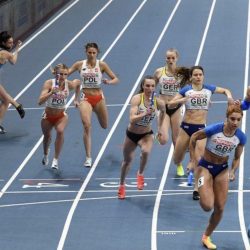