Crowd control police fired teargas and rubber bullets at hardcore protesters this evening, as the demonstrators tried to breach a wall of shipping containers, placed at the main Din Daeng intersection in Bangkok to prevent them from moving toward the First Infantry Regiment of Royal Guard barracks, where Prime Minister Prayut Chan-o-cha has his residence.

The protesters refused to disperse after leading members of the “Talu Fah” group, which organised the protest today, announced an end to the rally when they realised that the peaceful protest they had promised might turn violent. They responded with sling shots and flares aimed at the police.

Protesters started gathering around the Victory Monument at about 1.50pm, for the 3pm scheduled start of the rally. At about 3.40 pm a pickup truck arrived at the monument with mangosteen and longan, the fruits that are suffering massive price drops, which were then poured onto the road surface before being set alight, as a symbolic protest against the government’s failure to solve economic problems.

A leader of “Talu Fah” told Thai PBS reporters at the scene that the protest today would be peaceful and that they are demanding the prime minister’s resignation adding, however, that some protesters had resorted to violence in protests on Tuesday and Wednesday.

At about 4.20pm, the group announced that they would head for the prime minister’s residence, only to discover that access was, again, blocked by police, razor wire and a row of shipping containers, backed up by water cannons.

Some protesters tried to pull a container down with ropes and the police, deployed on an overpass, started firing teargas and rubber bullets at them.

At about 5.25pm, a leader of the Talu Fah group announced an end to the protest, which had started to turn violent, but hardcore protesters defied the announcement and engaged the police in street battles. At least two people have been injured and sent to hospital.

Heavy rain was reported, forcing several protesters to take cover under the expressway but, when rain stopped, they regrouped at the wall of containers to confront the police.

At about 6.25pm, two containers were removed to allow police and water cannon trucks to advance toward the remaining protesters.

In the meantime, members of the media were told to sit down, as the police moved in to flush out the hard core elements among the protesters.

A police booth, at Ratchathewi, was set ablaze again today after the same action earlier this week. The group has not yet succeeded in marching to Mr. Prayut’s residence to demand his resignation. 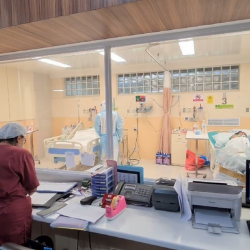