At their meeting on Tuesday, the cabinet is expected to approve the establishment of a command centre and associated budget to tackle drought.

Government spokeswoman Mrs. Narumon Pinyosinwat said today that the centre will be headed by Prime Minister Prayut Chan-o-cha and was the brainchild of the National Water Resources Committee (NWRC), in anticipation of water shortages, which are expected to be the worst for several years.

Mrs. Narumon said that the Prime Minister is fully aware of the severity of the upcoming drought problem and has instructed all agencies to prepare to cope with the problem.

In addition to the contingency efforts, the NWRC and related agencies have been assigned to develop a 20-year water management plan, to ensure that every village will have access to clean water for consumption, for agriculture and industry.

In the north-eastern province of Nong Khai, water resources officials report that the level of the Mekong River today has dropped to an average of 1.46 metres, about 10.74 metres below the top of the river bank.

It is also reported that algae and lichen have formed in the river bed as the water begins to stagnate.  The current conditions make fishing is almost impossible.

Mr. Boon Saengsuwan, a fisherman at Hat Sai Thong, said that, in his entire life he has never seen the Mekong River so clear and shallow, with the riverbed covered with algae and lichen.

In Bangkok’s neighbouring province of Pathum Thani, the Irrigation Department has developed a water sharing system, with the provincial administration, community leaders and farmers’ representatives, for rice farmers who need water for crop irrigation.

Water will be drawn from Khlong Rangsit Prayoonsak into irrigation canals for pumping into farms, on the condition that if the water level in the irrigation canals falls to 0.20 metres, water pumping must stop to prevent erosion of the Rangsit-Nakhon Nayok road. 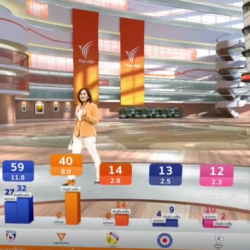 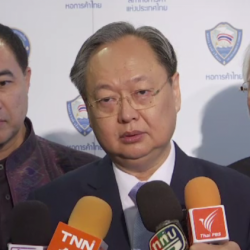 Palang Pracharat to detail Government performance to media every Sunday