Prime Minister Prayuth Chan-ocha refused to talk to the media when he presided over the opening of Thailand Social Expo 2018 at Impact Exhibition Centre on Friday morning.

The prime minister’s aloofness with the media was reported to stem from a commentary, entitled “Don’t let Thai junta chief chair ASEAN next year”, in The Jakarta Post dated July 31.

Written by Kornelius Purba, the commentary said the ASEAN chairmanship will be handed over by Singapore Prime Minister Lee Hsien Loong to Prime Minister Prayut this November and asked would Indonesia just let it happen.

It said that ASEAN will unnecessarily humiliate itself in front of the global community when the regional grouping introduces Prime Minister Prayuth as the chair next year.

The commentary accused Prime Minister Prayuth of employing tactics to silence the media, manipulate legislative bodies and oppress freedom of speech and assembly.  “But why do Thais, including the media, seem to “accept” the junta?

The commentary said Thailand deserves the right to chair ASEAN, but not under a junta that has continued to cling on to powers it robbed from the people four years ago.

Before he chairs ASEAN next year, Prayuth should fulfill his commitment of holding a free and democratic election.  If he does not do so, he should not chair the trade block next year, the commentary concluded.

On the same day at the same venue, the Special Branch police imposed a set of restrictions, dress code, and code of conduct on members of the media, especially photographers.

For instances, they are required to fill a registration form giving their names, where they work, their phone numbers and their ID card numbers.  Photographers must bow to the prime minister before and after taking his photos and must not take pictures while he is walking, descending on stairs or eating.

Later on, Prime Minister Prayuth commented that the order was made three years ago and he wondered why it had only surfaced now. He also added that he had already told Special Branch to revise some of the rules, including the gestures of respect. 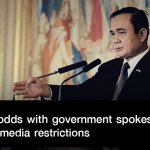