Prime Minister Prayut Chan-o-cha reaffirmed today that the election roadmap remains unchanged and any decision to delay it as demanded by some political parties would have to be made by the Election Commission.

The prime minister also continued to remain evasive about his own political future, only saying that he has not made up his mind whether to enter politics or which party to join.

He said that he needs to consult the law to find out whether a sitting prime minister could get involved in politics and at what level.

However, he hinted that the four members of his Cabinet who have joined the Palang Pracharat Party would soon resign from their posts and that no replacements would be appointed because the remaining ministers would be able to do their job.

Industry Minister Uttama Savanayana is now leader of Palang Pracharat Party while Commerce Minister Sontirat Sontijirawong is its party secretary-general. PM’s Office Minister Kobsak Pootrakool and Science and Technology Minister Suvit Maesincee are also leading members of the party which has openly declared it support for the military junta. 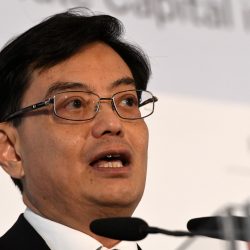