Prime Minister Prayut Chan-o-cha lost his cool today when confronted by reporters who pestered him with questions about the Election Commission’s redrawing of constituency boundaries that has come under criticisms of politicians who view it as gerrymandering.

He maintained that he had nothing to do with the EC’s work and the government did not interfere with the EC.

Prayut said no matter how the constituency boundary is drawn it’s the people who would decide whom to vote for.

“Do not insult the people.  This country does not survive because of just a handful of people, but by the people throughout the country,” said the prime minister.

He clarified that the constituency boundaries were redrawn to fit in with the changing population in each constituency to ensure fairness to all parties.

“How could the country change for the better if everybody wants the old constituency boundaries?” he asked.

Deputy Prime Minister Wissanu Krea-ngam, meanwhile, recommended that any individuals not happy with the EC’s latest constituency mapping could take the case to the Administrative Court.

Thai Raksachart election strategy chairman Chaturon Chaisaeng branded the EC’s redrawing of constituency boundaries as “the ugliest act”, pointing out that some districts were separated to incorporate with four separate constituencies “without regard for the feelings of the people, but to respond to the wishes of some politicians and some parties.”

He said the unfair redrawing of the constituency boundaries was a clear indication that the forthcoming election would not be free and fair.

Pheu Thai secretary-general Phumtham Wechayachai noted that the alleged unfair boundary redrawing occurred in constituencies of ex-MPs who defected to the pro-regime party, citing the constituencies in Nakhon Ratchasima, Sukhothai and Ubon Ratchathani.

“However, I have trust in the judgment of the people who will restore election fairness,” said Phumtham.

Democrat party leaderAbhisit Vejjajiva said that earlier allegations that the boundaries of some constituencies would be redrawn to fit the wishes of certain parties have proven to be true, citing the constituencies in Kanchanaburi and Sukhothai where the Democrats won the elections in the past.

The EC’s constituency mapping will tarnish the credibility of the EC as well as the National Council for Peace and Order, making it doubtful that the election will be free and fair, he said.

The Democrat leader admitted he was at a loss about what to do to rectify the situation, noting that the EC was protected by the executive decree invoked by the junta. 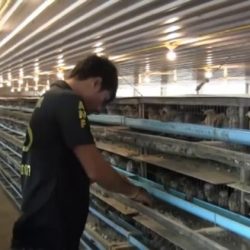