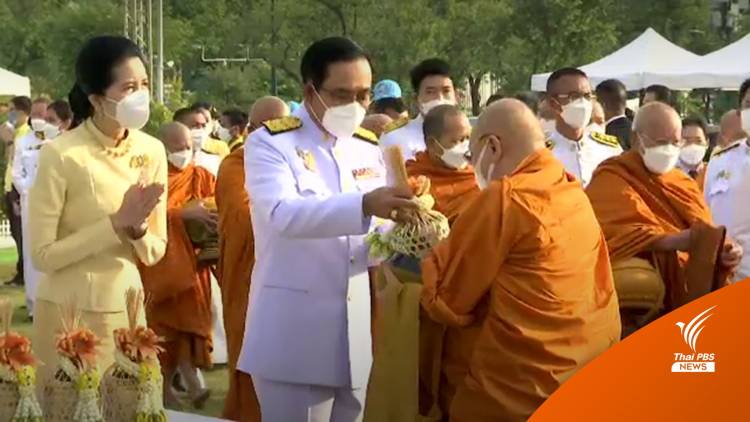 This morning (Sunday), Prime Minister Prayut Chan-o-cha and his wife led members of the cabinet, privy council, the legislature, the judiciary and the three armed forces, as well as their spouses, in offering alms to 89 monks at Sanam Luang, in a merit-making ceremony to mark the anniversary of the birth of the late King Bhumibol Adulyadej and the country’s Father’s Day.

The prime minister also invited members of the public to greet Their Majesties the King and Queen, who are scheduled to preside over the foundation stone laying for the statue of the late king at a new public park, currently under construction at the former Nang Loeng Royal Turf Club race course in Dusit district of Bangkok at 4pm today.

The 44.5 hectare plot of land was donated by His Majesty the King to be converted into a public park. It will be another landmark for Bangkok when construction completes in 2024.

The park has been designed to highlight the late king’s water management concepts, such as “kaem ling” (monkey cheeks), or water catchment area to ease flooding, and the Chaipattana Aerator, which is widely used to oxygenate water in ponds.

Million-dollar bond as US school shooter parents plead not guilty