About 200 members and supporters of the newly-formed party showed up at the TCSD office to offer moral support to Piyabutr, a former law lecturer at Thammasat University.  Also present, as observers, were Mrs. Angkhana Nilapaichit, a member of the National Human Rights Commission, and officials from the United Nations High Commissioner for Human Rights (UNOHCHR).

The charges of contempt of court and violations of the computer crime act stemmed from Piyabutr’s reading of a party statement, reacting to the Constitutional Court’s order to disband the Thai Raksa Chart party for nominating Princess Ubolratna as the party’s candidate for the prime minister.

Accompanied by a lawyer Piyabutr, who returned yesterday from France, told his supporters that he was not worried and would deny all the charges. Piyabutr is expected to be granted bail.

The outspoken Future Forward secretary-general said that, during his ten years as a law lecturer, he had criticized court verdicts before as part of academic study and had never been sued for contempt of court until he joined the party about a year ago. Nevertheless, he said that he trusts in the country’s judicial system and that all people would be treated fairly by the court.

It was noticeable that no representatives of foreign embassies were seen in front of the TCSD police office this morning, unlike April 6th when representatives from 13 embassies showed up at Pathumwan police station as Future Forward party leader Thanathorn Juangroongruangkit reported to the police.

The presence of the foreign envoys drew flak from the Thai Foreign Ministry which subsequently issued a memorandum expressing “displeasure” with the envoys’ conduct which, it deemed, was an interference in the Thai justice system. 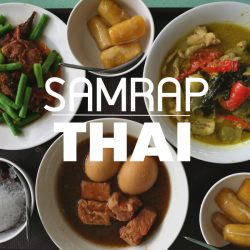 Samrap is the Name of the Game