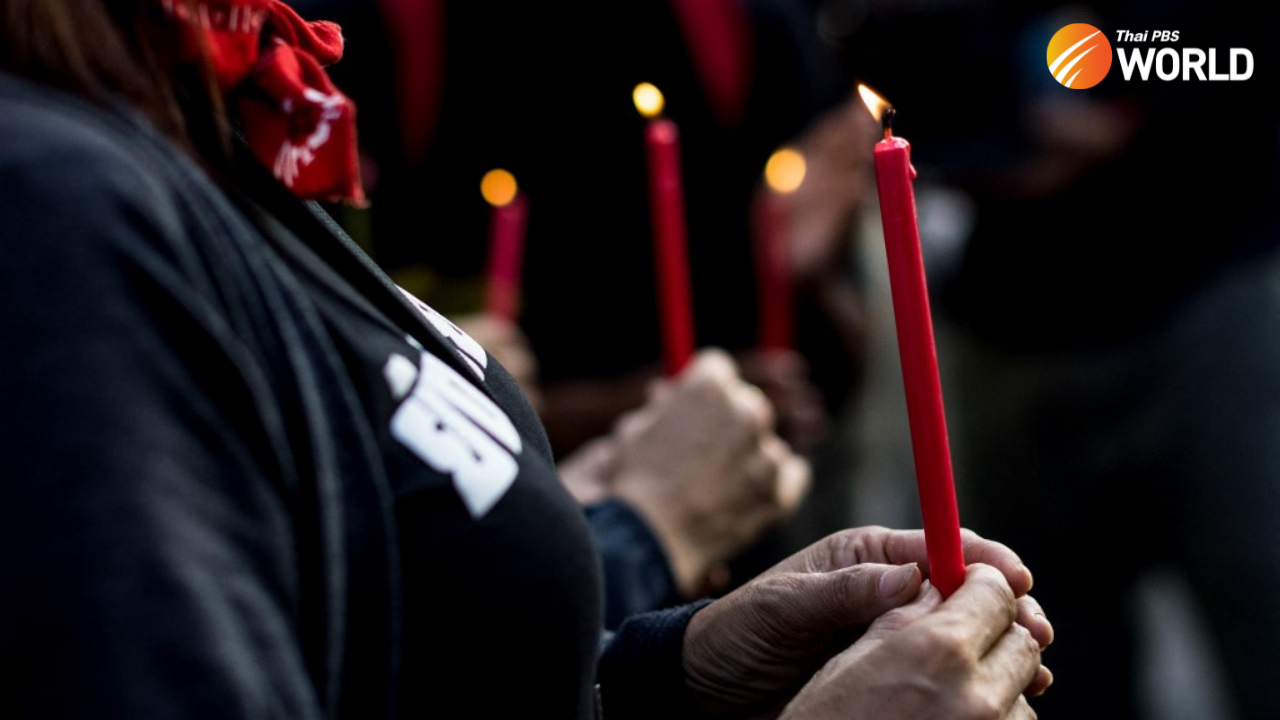 People hold red candles during a memorial for 15-year-old Warit Somnoi, a protester who has died two months after being shot during an anti-government rally, outside a police station in Bangkok on October 29, 2021. (Photo by Jack TAYLOR / AFP)

In politics, a man’s good news is another man’s bad one. However, here’s doom and gloom for all: Long-lasting national peace will remain very remote no matter what happens from here on out.

People bemoaning the national divide and vowing to fix it often come and go, but strife is here to stay and those promising to end it ends up intensifying it themselves. Prayut Chan-o-cha’s song pledging to be a reconciler has been mocked and his presence has aggravated divisions, but his opponents are also to blame.

It should have been their turn to provide or propose a workable solution, yet early signs are discouraging. Recent developments _ Thaksin Shinawatra’syoungest daughter being ushered into the picture and the Phra Kiew uproar _ all but confirmed that reconciliation will even be more elusive in Thailand.

Paetongtarn Shinawatra is Thaksin’s unmistakable “All in” message. Her arrival onto the political scene is even more significant than when Thaksin’s younger sister, Yingluck Shinawatra, took her unexpected bow many years ago. As strategically careless as he often is, Thaksin would not have risked his beloved daughter’s future if he had not been so confident of victory. Yet his stake this time means it’s a big gamble all the same.

Paetongtarn shall never be prematurely judged, but the appropriateness of throwing her into the waters right now must be seriously scrutinized. One main cause of Thailand’s national divide can be traced to the biggest political party’s inability to find a prime minister or prime ministerial candidate who does not aggravate divisions and thus can take the country out of a vicious political circle.

To be fair to Pheu Thai and her, anyone becoming the national leader, or potential national leader, at the moment will be hacked down by “the other side.” But that could also be the strongest argument against presenting a divisive figure at this particular time of cutthroat politics. With Pheu Thai having a great chance of winning the next election, what is the point of continuing to make Government House a Thai version of Jerusalem where sworn enemies take turn to control and would do anything to control, at a huge expense that badly disrupts national progress?

Paetongtarn Shinawatra, the youngest daughter of former prime minister Thaksin, made a surprise appearance at the opposition Pheu Thai Party’s general meeting in the northeastern Khon Kaen province on Thursday (Oct 28). Introduced by outgoing party leader Sompong Amornwiwat, the 35-year-old spoke briefly to announce her appointment as the party’s chief adviser on participation and innovation.

As a Thai, is Thaksin doing his motherland a great service? As a father, is he doing the right thing?

News and speculation about Paetongtarn are not the only bad sign. Prayut’s opponents have shown a tendency to go after “symbols” that they don’t like, and among their first targets is a big one, the procession of the Chulalongkorn University’s PhraKiew coronet. The uproar among those advocating the tradition is so big that the prime minister could be reaping some political gains from the move.

The Phra Kiew controversy adds to alarms over intolerance and cultural prejudices plaguing Thailand at the moment. Fights over symbols and disregard for feelings of the opposite side have escalated over the past few years. Both halves of the national divide are at fault, but the onus is more on those seeking to change the status quo because they must prove that the changes they want are ones that truly respect human rights, not just “rights” that they advocate.

When people are warned that they must not become their own worst enemies, few are told how easily that could happen, and how easier it can even get in politics.

And for Thai politics, forget about the normal “easy” or “easier”, because it’s the easiest. A liberal can become a totalitarian in a heartbeat. A promoter of “democracy” can lambast “fake news” and crackdown on media outlets once he or she is in the corridors of power. Ones fighting for “equality” can one day fail to remember that different people should be allowed to think differently, or cherish some kind of traditions that cause harm to no one.

The slippery slope is so gaping, and anyone can cross the line, which is not only super thin, but also very blurry. Even those with pure ideological hearts can fall into the trap.

Thinking that one is right can lead one to do much wrong. Thaksin thinks he is right, so he madeSomchai Wongsawat and Yingluck Shinawatra his proxies. Again, it did not matter who they really were as persons, because as long as the torch is passed back and forth among people with strong connections with the Shinawatras or the Shinawatras themselves, national peace is delusional and reconciliation is just rhetoric.

People criticizing the Phra Kiew procession think they are right so they seek to scrap it. Can they do it? Yes. Will it help bring about peace? No.

All this makes a mockery of the assumption or proclamation that problems will be solved if Prayut leaves the scene or if those clamoring for changes get power. All this only makes sure that whoever is Thailand’s next prime minister, he or she will be on borrowed time from Day One.