The Philippines has become the world’s second most dangerous place for environmental activists after Brazil, with 48 green advocates killed last year, The Manila Times Online reported.

According to watchdog Global Witness, Brazil was the most dangerous country, accounting for 57 of more than 200 environmental activists worldwide who were killed last year as government-sponsored killings linked to lucrative projects by vast agriculture multinationals soared.

The watchdog found seven cases in which more than four activists were killed at the same time, including the massacre of eight villagers protesting a coffee plantation by soldiers in the Philippines.

Global Witness had documented 207 cases where activists were killed while trying to protect land from development, often for the production of consumer staples such as coffee and palm oil, making 2017 the deadliest year on record for environmentalists.

Global Witness’ report on environmentalist killings documents harrowing crimes around the world against communities daring to speak out against big businesses and government-led development.

The watchdog singled out the government of Brazilian President Michel Temer for special criticism, accusing his administration of seeking to reduce regulations on big businesses during what is an election year.

In addition to being the deadliest single year for environmentalists since Global Witness began documenting their deaths, 2017 saw the most massacres of land activists on record.

By far the most frequent victims of violence were indigenous peoples, who are often already maligned by governments and society. 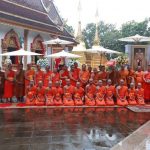