Paetongtarn, who is also head of the so called “Pheu Thai Family”, said that their candidates can work with the candidate from any party, or an independent candidate, who emerges as the winner of the Bangkok gubernatorial election.

She said she would like the party’s candidates win most of the 50 council seats so that the party can implement its policies.

Pheu Thai is not fielding a candidate in the gubernatorial race.

While campaigning at Suksawat Market, he promised vendors and shoppers that garbage collection would be improved under his governorship. He said that more but smaller garbage trucks would be procured, so that they could collect garbage from congested communities, which are normally inaccessible to garbage collection services.

Sita would make use of Blockchain technology to examine all procurement contracts undertaken by the city administration, to get rid of corruption at all levels, said Khunying Sudarat.

If elected, the candidate would expose any problems which have been swept under the carpet, dare to think outside the box and scrap every outdated rule which poses a stumbling block to the development of the capital, said Sudarat.

Is the gulf between crypto believers and skeptics unbridgeable? 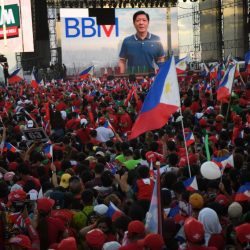