Workers have been using heavy equipment to move the Nok Air Boeing 737-800, which is partially blocking the runway of Mae Fah Luang-Chiang Rai international airport, after it was discovered that the plane’s landing gear had broken and become embedded in the ground.

The airport’s Director, Sqn.Ldr. Somchanok Tiamtiabrat, said today (Monday) that Nok Air, which is responsible for moving the plane, has deployed men and heavy machinery to do the job, adding that a road has had to be built to allow the heavy lifting gear to be placed under the plane to lift it.

He did not say how long it will take, but the runway is closed to all flights until Wednesday night.

He said that officials from the Aircraft Accident and Incident Investigation Committee are yet to inspect the accident site.

The Nok Air plane, carrying 164 passengers and six crew, arrived at the airport from Bangkok on Saturday night at about 9 pm. As it was taxiing towards the apron in heavy rain, the plane skidded off the runway. 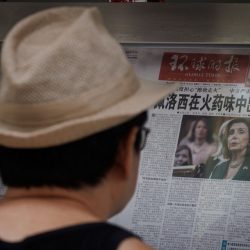