No special treatment for citizenship for 4 “Wild Boars”

Mae Sai district officials are searching for the birth certificates of three members of the Wild Boars Academy football team and their coach, Aekkaphol Chanthawong, legally required for the process of granting citizenship to stateless persons.

Mae Sai district chief officer Somsak Khanakham said Friday that the Wild Boars Academy football team has about 60 members and many of them are stateless persons, including the four survivors from Tham Luang cave.

The ten stateless footballers met with Mr Somsak about two months ago after they won Chiang Rai’s football tournament for footballers in 18-year and 12-year old age groups to discuss the citizenship issue.

The district chief officer said he told them that there was a possibility for acquiring Thai citizenship, but they have to file formal requests for citizenship because they were all born in Thailand.

According to cabinet’s resolution adopted in 2016, the district chief officer is empowered to grant citizenship to individuals if they have evidence to show their birthplaces with birth certificates from a hospital. If a birth certificate is not available, the stateless person must present a midwife, a neighbor or a village head who can guarantee that he/she was born in Thailand.

He cited a case in which there was evidence that a stateless person was born at Mae Sai hospital, but the parents’ names on the birth certificates were not the same with the names of his biological parents. In this particular case, Somsak said the stateless person had to look for other official evidence to prove that he was born here.

The district chief officer said the official papers of the four Tham Luang survivors were incomplete and they would have to prove to the satisfaction of officials concerned about their birth places and only their biological parents would apply for their citizenship.

Local Administration director-general Arhit Boonyasophat, meanwhile, said that, after initial checks of their qualifications, there should not be a problem for the four Tham Luang survivors to apply for Thai citizenship, providing that their parents prepared the necessary documents and followed the advice of local administration officials.

For teenagers under 18, the district chief officer is authorized to issue the citizenship but for those older than 18, the authority rests with the provincial governor.

He insisted that the citizenship case concerning the Moo Pa team members was not a special case, but just an ordinary one.

Currently, there are about 3,500 stateless children in the country, awating Thai citizenships. 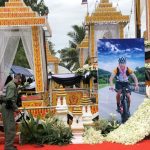