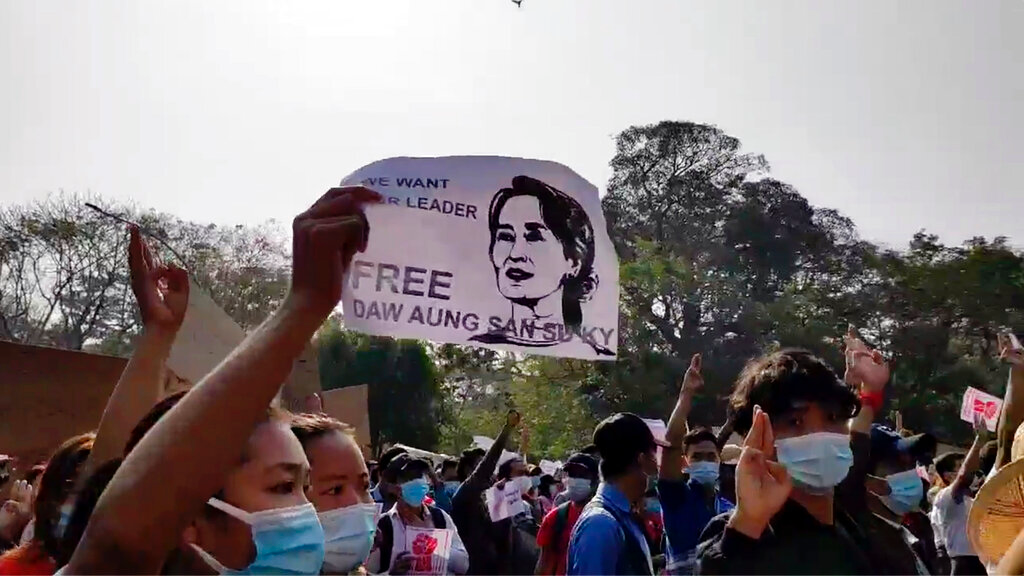 In this image made from video provided by the Democratic Voice of Burma (DVB), a protester holds a sign that says ‘Free Aung San Suu Kyi’ with an image of the deposed Myanmar leader as they march in Yangon, Myanmar Sunday, Feb. 7, 2021. (DVB via AP)

Thai and other foreign companies are expected to delay their investments in Myanmar following a military coup that threatens Thai border trade and migrant labour.

Before the coup, Myanmar’s economy had been hit hard by COVID-19 and slower-than-expected reform.

The military takeover is another economic blow, as businesses and consumers are bound to delay spending during this volatile period.

“Thai and foreign investors will likely postpone their investment in the short run due to political uncertainty,” said Amonthep Chawla, chief economist at CIMB Thai Bank.

He went further, saying that over the past five years Myanmar had lost out on attracting foreign direct investment (FDI), partly due to slow progress in economic reform.

“In recent years, we have been directing Thai investors to explore opportunities in Vietnam and Cambodia instead,” he said.

Amonthep and other economists still foresee long-term potential in Myanmar, which is rich in resources and boasts a relatively young population.

However, the country’s future also depends on whether the United States and Europe impose sanctions because of the coup. President Joe Biden has already said penalties are being considered.

“If the US imposes severe sanctions which also prohibit other countries from doing business with Myanmar, the impact will be very large,” Sompop Manarungsan, president of the Panyapiwat Institute of Management, warned.

US sanctions like those imposed against Iran and North Korea would hit Myanmar’s economy hard, added Sompop, an economics lecturer at Chulalongkorn University.

The research house forecasts that if Western powers cancel Myanmar’s trade privileges, its economy will contract 0.5 to 2.5 per cent this year due to the impact on both trade and investment, as well as employment and domestic consumption.

Nonviolent resistance to Myanmar’s military coup gathered steam Friday, with public protests extending to several regions, including the tightly controlled capital, Naypyitaw. The military has tried to quash opposition with selective arrests and by blocking Facebook access to prevent users from organizing protests.

It expects the value of Thai exports via the Myanmar border to shrink by 0.5 per cent to Bt86.6 billion this year, contracting for a fifth successive year.

Last year, the value of Thailand’s exports to Myanmar via border checkpoints dropped 12.4 per cent to Bt87.1 billion.

The new military government may also restrict the mobility of labour. This could lead to a shortage of legal migrant workers in Thailand, including in agriculture, where Myanmar migrants make up 25per cent of the workforce, in retail and restaurants (17 per cent), in construction (15 per cent), and in fisheries and fishery processing (10 per cent). Thailand is home to 2.8 million legal migrant labourers, most of them from Myanmar, according to Kasikorn Research.

The European Union handed trade privileges to Myanmar in 2013 following its adoption of political reforms in 2011. After the ensuing transition period from military rule to a democratic system, Suu Kyi’s party won the first free election in late 2015. The US government lifted trade sanctions against Myanmar a year later.

Improving relations with Western powers contributed significantly to the higher growth of Myanmar’s economy, according to Kasikorn Research. Foreign direct investment has led to a rise in exports, transition from an agricultural towards an industrial society, more jobs, and significantly higher consumer purchasing power.

Currently, Myanmar’s exports to the EU and US account for 23 per cent of its total exported goods.

Myanmar’s textile and clothing industry would be hit especially hard if the EU and US cancel trade privileges. The products would then face a 12 per cent tariff in the EU and about 20 per cent in the US.

Clothing and textiles represent one-third of Myanmar’s total export trade value. Up to 60 per cent of these products are shipped to the EU and US markets.

Prior to political reform in 2011, Myanmar’s ability to draw FDI was mainly limited to major investors from Thailand and China who took advantage of rich natural resources such as oil, natural gas, copper and precious stones.

Since the launch of political reforms, investment has poured in from Singapore, Vietnam, Japan and the Netherlands, while FDI from China and Thailand has decelerated, said Kasikorn Research.

Myanmar’s success in attracting multiple national investors helped combat its overreliance on natural resources since investment was pumped into industrial sectors such as textile and clothing. Lured by the cheapest labour costs in Asean, investment in infrastructure such as roads, industrial estates, and electricity-generating plants also rose significantly.

However, the military coup may lead to delays or even cancellation of foreign investment over worries of domestic political instability coupled with the risk of Europe and the US cutting trade privileges.

Kasikorn Research predicts FDI could fall by as much as 30 to 40 per cent this year as a result.

However, investment from China will rise, as it sees Myanmar as a bridge for its trade route from Yunnan province to the Indian Ocean. But Chinese investment is likely to concentrate on infrastructure projects, not manufacturing, so it will not boost the competitiveness of Myanmar’s industries, added the research house. 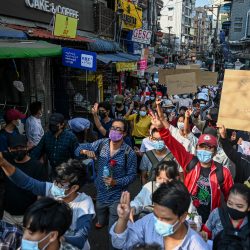 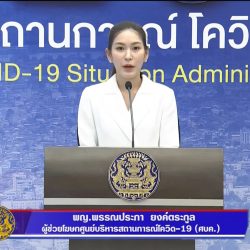 237 new COVID-19 infections in Thailand on Sunday, down from 490 yesterday