Most respondents to a recent poll agree with House Speaker Chuan Leekpai’s suggestion that, if the Constitution is to be amended, the five military top brass and the national police chief should not be appointed ex-officio senators.

According to Super Poll, 75.4% of the respondents agree that the six key figures, namely the supreme commander, the commanders of the army, navy and air force and the national police chief, should not be automatically appointed senators, because their role in charge of national security is not related to the legislative role of the Senate, and that it is inappropriate for them to receive salaries from two state sources, parliament, the military and the police, at the same time.

24.6% of the respondents, however, oppose the suggestion because they think this issue is insignificant and they don’t want to see the country return to political division as a result of attempts to amend the Constitution.

Super Poll Research Office director, Mr. Noppadol Kannikar, noted that the survey shows a shift in sentiment regarding the fate of the Future Forward party, which is facing the prospect of being dissolved by the Constitutional Court, and about the rewriting of the Constitution, which, he said, is a matter of concern.

Regarding the Future Forward party’s fate, the poll shows that the number of those indifferent to the issue has dropped to 42.8% from 77.4%, while about 30.7% said the dissolution of the party would not bode well politically.

The poll also shows that fewer people are optimistic that the country will move forward smoothly, from 68.5% last October to 52.2% today.

If the poll results are any indication of the public’s mood, Mr. Noppadol said the government should do something quickly to make people feel good “otherwise it will be too late.”

Super Poll surveyed the opinions of 1,162 people from January 2nd to 4th. 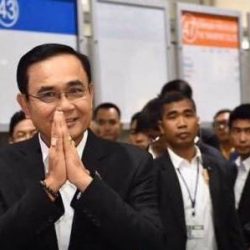