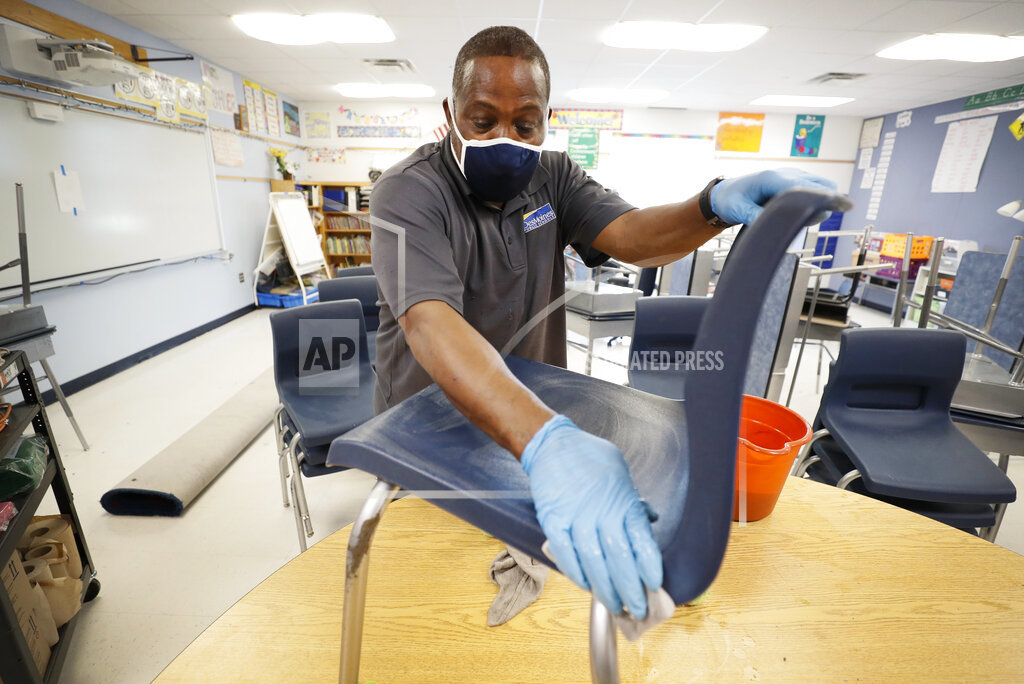 Des Moines Public Schools custodian Tracy Harris cleans a chair in a classroom at Brubaker Elementary School, Wednesday, July 8, 2020, in Des Moines, Iowa. School districts that plan to reopen classrooms in the fall are wrestling with whether to require teachers and students to wear face masks. In Iowa, among other places, where Democratic-leaning cities like Des Moines and Iowa City have required masks to curb the spread of the coronavirus, while smaller, more conservative communities have left the decision to parents. (AP Photo/Charlie Neibergall)

FORT LAUDERDALE, Fla. (AP) — Millions more children in the U.S. learned Friday that they’re unlikely to return to classrooms full time in the fall because of the coronavirus pandemic as death tolls reached new highs.

It came as many states — particularly in the Sunbelt — struggled to cope with the surge and governments worldwide tried to control fresh outbreaks. In a sign of how the virus is galloping around the globe, the World Health Organization reported nearly a quarter-million new infections in a single day.

In the U.S., teams of military medics were deployed in Texas and California to help hospitals deluged by coronavirus patients. The two most populous states each reported roughly 10,000 new cases and some of their highest death counts since the pandemic began. Big numbers in Florida, Arizona and other states also are helping drive the U.S. resurgence that’s forcing states to rethink the school year.

California Gov. Gavin Newsom laid out strict criteria for school reopenings that makes classroom instruction unlikely for most districts. The Democrat’s rules mandate that students above second grade and all staff wear masks.

Texas gave public schools permission to stay closed for more than 5 million students well into the fall. Under the guidelines, schools can hold online-only instruction for up to the first eight weeks, potentially pushing a return to campus in some cities until November.

Most Chicago children would return to the classroom just two days a week and spend the other three days learning remotely under a tentative plan outlined by officials from the nation’s third-largest school district. A final decision for fall classes for the district’s more than 300,000 students won’t come until late August.

Iowa Gov. Kim Reynolds, a Republican, announced she will override school districts and require students to spend at least half of their schooling in classrooms, drawing criticism from the state teachers union.

The uncertainty about the way to safely restart schools has parents like Ivette Garcia of Orange Park, Florida, struggling with what to do. When she learned her school district only had two options this fall, in-person or virtual lessons, she decided to keep her kindergarten son home. She plans to schedule instruction before and after work, with her parents reinforcing education in between.

“The schools’ start date is less than 30 days away. And I don’t feel that there’s a very great plan in place that makes me feel comfortable enough to send my baby to school and then return back to our family dynamic,” Garcia said.

Several states have been reporting record numbers of COVID-19 this week, contributing to a surge in the national death rate. The seven-day rolling average for daily new deaths has risen 34% from two weeks ago, while the case count in that period shot up 43%.

Texas reported a record 174 new deaths, and more than 10,000 additional cases for the fourth consecutive day. California’s nearly 10,000 confirmed cases were its third-highest daily total, and it recorded 130 deaths during a week of seesawing infection numbers.

There were signs across the Sunbelt that the virus was stretching authorities’ capacity to respond. The medical examiner’s office in metro Phoenix has gotten portable storage coolers and ordered more to handle an influx of bodies — reminiscent of New York City at the height of the pandemic there.

In Houston, an 86-person Army medical team worked to take over a wing of United Memorial Medical Center. In California, military doctors, nurses and other health care specialists were being deployed to eight hospitals facing staffing shortages.

Some hospitals in South Carolina also were being squeezed: The number of patients with COVID-19 is increasing rapidly, while nurses and other workers are getting infected when they are off work, said Dr. Wendell James, a senior vice president with Prisma Health who is based in Greenville.

“The majority of the illness we see in our nursing staffs and our support staff is community spread,” he said. “Almost all of it I can’t control.”

In Florida, Miami-area authorities began stepping up enforcement of a mask requirement. Code and fire inspectors have authority to issue tickets of up to $100 for individuals and $500 for businesses not complying with guidelines to wear masks and practice social distancing. Police already had that power.

Shaun Alley, assistant manager of Blue Collar, a Miami comfort food restaurant, said all of the customers eat outside on picnic tables and are asked to wear masks when not eating.

“We tell people flat out: ‘Either you comply or we have the right not to serve you,’” he said. “We haven’t had any issues so far.”

At least half of all states have adopted requirements for wearing face coverings.

But in Georgia, Republican Gov. Brian Kemp has banned cities and counties from requiring face coverings. He sued Atlanta late Thursday to prevent it from defying his order, and Mayor Keisha Lance Bottoms said she was prepared to go to court to maintain the requirement.

Globally, confirmed cases numbered more than 13.9 million Friday, according to a tally from Johns Hopkins University, and COVID-19 deaths totaled more than 590,000. WHO reported a single-day record of new infections: over 237,000. Experts believe that the true numbers are even higher.

India’s total confirmed cases surpassed 1 million, the third-highest in the world — behind the United States and Brazil — and its death toll reached more than 25,000. That followed an announcement Thursday that its confirmed cases exceeded 2 million, including 76,000 deaths.

The surge in India — where experts believe the vast majority of cases are still being missed — drove home concerns over the readiness of some countries to cope with outbreaks that could test feeble health care systems.

In sub-Saharan Africa, which already had the world’s greatest shortage of medical personnel, nearly 10,000 health workers in 40 countries have been infected, WHO said.

In Spain, which was one of the hardest-hit countries earlier in the pandemic, health officials asked Barcelona’s 5.5 million residents to stay home as much as possible to stem the virus’s spread.

British Prime Minister Boris Johnson charted a different course, announcing that as of Aug. 1, the government was no longer asking people to avoid public transit or work from home.

The U.K.’s official death toll, which stood at more than 45,000, has for several weeks been the highest in Europe.

Crary reported from New York. Associated Press reporters around the world contributed to this report. 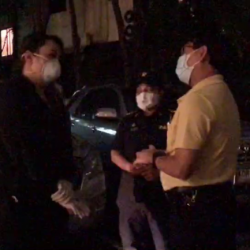 Diplomat refused accommodation at a condominium is not an Estonian envoy 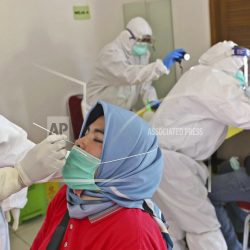