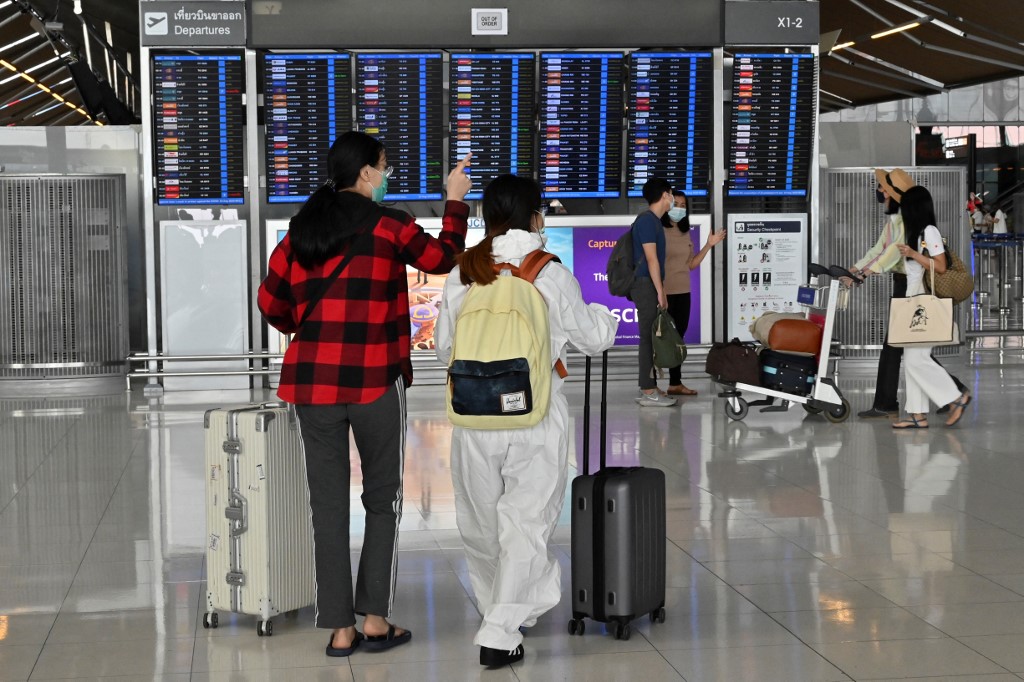 Passengers wearing face masks and a protective suit as a preventive measure against the COVID-19 coronavirus arriving at the departure terminal of Suvarnabhumi airport in Bangkok. (Photo by Romeo GACAD / AFP)

Thai social media has lit up with heated debate about citizens who have vowed to leave the country over growing frustration with the government’s COVID-19 vaccination policy.

Both sides of the political divide, including scholars and political analysts, have been trading barbs and arguments since the launch of the “Yai Prathet Kan Ther” (Let’s Move Out of the Country) Facebook campaign on Saturday (May 1).

The campaign, thought to be driven by young people, had drawn more than 700,000 followers as of press time on Tuesday. The campaign’s hashtag was also trending on Twitter, with over 528,000 tweets and retweets.

Many members shared tips on moving out of the Kingdom and living overseas, earning much praise from people “fed up with life in Thailand”, but ridicule from those who disagreed. Critics branded the aspiring migrants as “nation-haters”, accusing them of being problems themselves.

This rising social tension follows the emergence of Thailand’s third wave of COVID-19, which has brought record spikes in daily infections and deaths. Public opinion is placing the blame squarely on the government’s slow vaccination rollout, even though authorities insist 70 per cent of the population will be inoculated to create herd immunity by the end of this year.

In just two days, over half a million Thais have joined a new Facebook group called “Let’s Move Abroad”, amid increasing criticism of the Thai government’s handling of the COVID-19 pandemic and economic and political issues.

‘They see no future here’

Assoc Prof Somchai Preechasinlapakun from Chiang Mai University’s Law Faculty said many young people want to leave Thailand because “they see no future in this society”, adding the same thing happened in South Africa during the Apartheid regime in the 1970 and ’80s.

He called on people in power to “see how seriously pathetic our political system is” instead of simply telling critics of the country to move out.

Somchai Srisutthiyakorn, a former member of the Election Commission, echoed that point, saying young people want to move overseas because they have lost all hope in Thai politics.

He urged the authorities to not to ignore this trend among the younger generation or view it as mere wishful fantasy.

“These people do not hate the country. Instead, its rulers have made them feel Thailand is no longer a good place to live, so they want to go,” he said.

Some opposition politicians say the growing migration push can be blamed on Prime Minister Prayut Chan-o-cha and his allies, who they accuse of hijacking the future of young Thais.

Nattawut Saikua, a red-shirt leader and former deputy commerce minister, believes a mass exodus of Thais is unlikely but adds that the migration campaign could be a focus for opposition to the government.

Opposition MP Wiroj Lakkhanaadisorn of the Move Forward Party said the push to migrate was growing stronger because a “group of conservatives” was preventing young people from participating in national development.

“Why would [young people] waste their youth? It’s better to become world citizens and help with world development,” he said.

Many people, however, disagree with the pessimistic view of Thailand.

Prat Samsee, a Facebook page popular among conservatives, reminded netizens there were still plenty of people happy to call this country their home despite knowing it isn’t perfect.

“You have the right to migrate if you believe there is a better place. But sometimes you just need to look in from outside to see just how good our home [Thailand] is,” the page administrator posted on Monday.

Academic Arnond Sakworawich, meanwhile, shared his experience of racism abroad, encountered when he worked at a university in New York. It was then that he realized that living in his motherland was far better than being a second-class citizen in a foreign country, he said.

Brian A Jackson, an expat living in Thailand, cautioned that “the grass is not always greener on the other side of the fence, although it may give that impression”.

He said he had left the United Kingdom for Thailand a decade ago. “I’m so glad I did. Even though things have only gone downhill for expats since that time, I’d still rather be here.”

Award-winning novelist and social critic Wimon Sainimnuan, meanwhile, doubted the campaign would lead to a “brain drain”, with educated Thais seeking new lives abroad. “Not many of them will go and nobody will regret it [their departure],” he wrote on Facebook.