Government MPs and a senator have separately proposed a special parliamentary session be convened in the light of the student flash mobs occurring across the country.

In a letter, addressed to House Speaker Chuan Leekpai, Democrat party-list MP Issara Seriwattanawuth proposed an urgent motion for the House to consider the establishment of an ad hoc parliamentary committee to hear the students’ political views, and to give them to have a role in solving political conflict by working with legislators.

Palang Pracharat MP for Bangkok, Ms. Pada Warakanont, said that she will discuss the matter informally with her fellow MPs.

Senator Kamnoon Sitthisamarn agreed with the two government MPs, noting that the protests might spiral out of control if MPs and senators wait until the new session of parliament begins before addressing the issue.

The students are protesting against the Constitutional Court’s dissolution of the Future Forward party and are now demanding a change of government and an end of what they view to be military dictatorship.

Over 1,000 students and members of the public attended a protest rally at Kasetsart University in Bangkok on Saturday.  Some of the protest leaders indicated that they were considering taking to the streets to extend their anti-government movement. 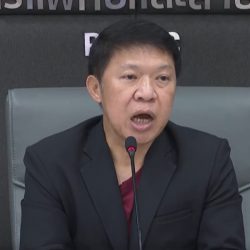