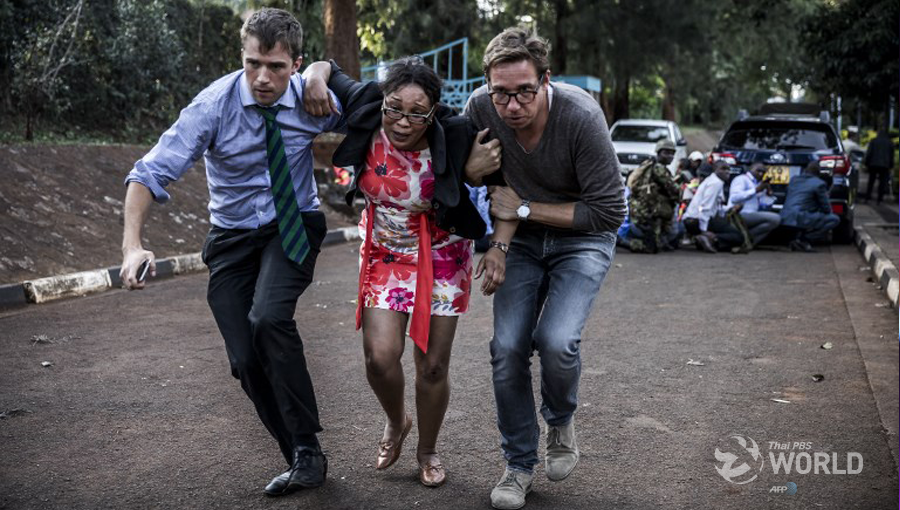 A woman is evacuated from the scene of an explosion and gun assault at DusitD2 complex in Nairobi, Kenya, on Tuesday.

NAIROBI – Kenyan security forces have “eliminated” the militants who stormed an upscale hotel compound of the Bangkok-based Dusit hotel group, and killed at least 14 people in an attack claimed by Somali Islamist group al Shabaab, President Uhuru Kenyatta said on Wednesday, according to Reuters.

Meanwhile, the Dusit International issued a statement to say that it was saddened by the violence at the DusitD2 complex  and confirmed that all the Thai staffs were safe.

“We are extremely saddened by this act of violence and would like to extend our deepest sympathies to all those affected,” said the statement posted on the group’s website. “Our highest concern is the safety and well-being of our guests and employees, and we are providing all support we can. The Royal Thai Embassy, Nairobi, Kenya has confirmed that all Thai staff are safe.”

It also said the hotel has been closed until further notice.

More than 700 civilians had been safely evacuated from the hotel after an attack that echoed a 2013 assault on a Nairobi shopping center that killed 67 people, according to President Kenyatta

“The security operation at Dusit complex is over, and all the terrorists eliminated. As of this moment, we can confirm that 14 innocent lives were lost through the hands of these murderous terrorists,” Kenyatta said, looking drained and grave.

He did not specify how many assailants took part in the terrifying 20-hour siege. CCTV footage showed at least four.

“From the means available to the security services and judicial arms, we will continue taking every step to make our nation inhospitable to terrorist groups and their networks,” added Kenyatta, the son of Kenya’s founding father, added.

The east African nation is a hub for expatriates and has often been targeted by al Shabaab in revenge for sending troops to help protect the weak, U.N.-backed government in Somalia.

The attack on the hotel began shortly after 3 p.m. on Tuesday with an explosion in the parking lot and then a suicide bomb blast in the foyer, police said.

At least two groups of people had still been trapped inside as dawn broke, and gunfire continued to ring out.

Eleven Kenyans, an American and a Briton were among the casualties, morgue staff said. Two victims were not identified.

Some victims had been dining in the Secret Garden restaurant and lay slumped at tables, photos seen by Reuters showed.