Japan welcomed the start of a new Reiwa imperial era and a new emperor on Wednesday in a festive New Year mood, with hopes for peace and prosperity.

Emperor Naruhito, 59, was formally invested on Wednesday after his father, Akihito, 85, stepped down the day before.

Akihito, the first Japanese monarch to abdicate in two centuries, became an active symbol of peace, reconciliation and democracy during his three-decade Heisei era. Many expect Naruhito to follow that model, but with his own style.

“The curtain has gone up on a new era that will be filled with hope,” said Hiroshi Takahashi, 78, outside his ‘wagashi’ traditional Japanese sweets shop in Tokyo.

Heisei saw economic stagnation after a frothy asset bubble burst in the early 1990s, but unlike the previous Showa era, during which Japan fought, lost and recovered from World War Two, Japan did not participate in military conflicts.

“The Heisei era was an era in which we did not take part in war and I’d like Reiwa to be the same – a world without war,” said Kazue Miaji, 67, outside a shop in downtown Tokyo.

Japan’s U.S.-drafted, post-war constitution prohibits the maintenance of a military, although successive governments have stretched it to allow armed forces exclusively for self-defense. The charter also defines the emperor as a “symbol” of the state and the unity of the people, without political power.

Japanese traditionally refer to the date by the era name, or “gengo”, a system originally imported from China, on documents although many people also use the Western calendar.

Japan is marking the imperial transition with an unprecedented 10-day holiday that some analysts say will give the economy at least a short-term boost.

Salaryman Shigeru Yoshizawa said he hoped the economy – which experts fear is slowing down – would get better.

“I want it (Reiwa) to be a world that is peaceful and I’d like the economy to improve,” he said.

Unlike when Akihito took the throne as the nation mourned the death of his father Hirohito in January 1989, the abdication means that the transition is taking place in a celebratory mood.

“A change in era may happen only once in our life time, so it’s a happy day, and I wanted my child also to be present at that moment,” said Ayako Nakayama, 33, outside the palace with her husband Masahiro and their 10-month-old son. “I hope this is a peaceful era where everyone can live with smiling faces.’

Elsewhere, couples wanting to register their marriages as soon as the Reiwa era began at midnight had lined up at government offices, which set special desks for the paperwork.

For 29-year-old Kenya Fujisaki, the move was mostly practical. “This way, it’s easy to remember my wedding anniversary, which guys tend to forget,” said Fujisaki, who with his wife Saya was the first to register at Tokyo’s Edogawa ward. 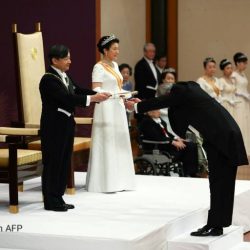 Japan's Emperor Naruhito pledges to work as symbol of the people 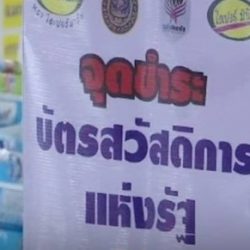